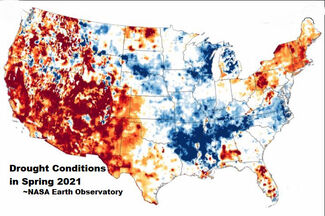 Scientists in America and around the world are pointing to a vast accumulation of weather data that do more than suggest certain regions are, in terms of both excessive heat and lack of rainfall, in dire straits (See Graphic-1 – water level comparisons for Lake Powell, Arizona). So much so that politicians at all levels of state and federal government – including our own Governor, Gavin Newsom, along with leaders in the business community – are taking notice.

And while we Borregans who live at the edge of the Sonoran Desert are used to our arid way of life, even the ecosystems surrounding us are exposing, year by year, difficult and long-term challenges now and in the years ahead for plants, animals, and people alike.

Folks living in Death Valley's Stovepipe Wells woke up on July 11 to a sweltering 107.7º F temperature, the highest "low" ever recorded in North America, and by afternoon it was 128.6º F. Those two data points produced the highest daily average temperature – 118º F – ever recorded on the planet!

On a worldwide stage, but commenting on both national and local scales of events, the New York Times reported, "Last month's (June) average temperature was more than two degrees Fahrenheit higher than the average from 1991 – 2020, providing more evidence that human-caused emissions of carbon dioxide and other heat-trapping gases are warming the planet." (See Graphic-2 – National Drought Status).

The Times article spotlighted the enormous "heat dome" of high-pressure air, stalled over the northwestern states, where temperatures reached triple digits in Portland, Oregon, Seattle, Washington, and other cities, 30 to 40 degrees above average for the month. "In a region where until recently air conditioning had been an afterthought, heat-related deaths soared," the report said.

It seems we Borregans received and read the "A/C is necessary" memo a lot earlier than others. But for nearly everyone, temperature records get broken year after year – June was the hottest month on record for North America, and fourth hottest globally. The years 2011 – 2020 produced the hottest decade on record. And local rainfall? A precipitation update for those interested: In the current "water year" between September 2020 and April 2021, we had all of 2.11 inches of rain recorded at the Park Headquarters rain gauge. That's about four inches shy of our average yearly rainfall for all water years going back many decades. Our commitment to a whopping 75% reduction in water use for agriculture, golf courses, and municipal needs reflects our current and future situations, namely the State-mandated and precipitous (excuse the pun) reduction in Borrego's groundwater extraction.

As far as the State is concerned, large swaths of California remained in the most severe Drought category in this week's U.S. Drought Monitor report, published by the Drought Mitigation Center at the University of Nebraska-Lincoln, in partnership with NOAA and the Department of Agriculture. The Report states that more than 33 percent of California is in exceptional Drought, the most severe of the Monitor's four categories (See Graphic-3 – California Drought Map).

At this time last year, only 41.5 percent of California was in one of the Drought categories. The Report reveals that 97.5% of California is currently in some stage of Drought.

We in Borrego have been spared the brunt of the Drought impact occurring throughout the State, being in a region designated "Moderate Drought." As mentioned previously, we're dry, but we're kind of used to it. What we're not used to is a one-third reduction in plant species in the region over the past few years, also affecting every creature from bugs in the soil to birds in the air in the surrounding Anza-Borrego Desert State Park. (See Nikki Symington's comprehensive article "Heat: Plant Die-Off" in the July 8 issue of the Borrego Sun, Page 1).

So, is there hope on the horizon, however distant or elusive it may be? Let's take a quick peek at wildflower blooms. The water year 2016 – 17 produced enough rainfall for an explosion of flowers we have come to call a Super Bloom. It was, not coincidentally, also the time of La Niña, the younger and cooler-water sister of the oceanographic phenomenon El Niño, a warmer state of the Pacific Ocean.

These two phenomena are opposite phases of the natural climate pattern across the tropical Pacific that swings back and forth on average every 3 – 7 years, and they are referred to as the ENSO (El Niño Southern Oscillation). We are now in what is called an ENSO-neutral condition, meaning between El Niño and La Niña events.

The metaphorical porridge is neither too hot nor too cold right now to make accurate, long-term weather predictions for Borregans and other desert-dwellers. However, the climate/weather picture may, repeat may change toward the end of 2021. But only if our 2016 – 17 Super Bloom conditions repeat, late this year, in a possibly wet, as opposed to a usually dry La Niña event. We're four years out from the official end of the last Drought, and therefore almost midway in cyclical 3 – 7 year La Niña events. So we're about due for another, and that's positive.

Such an event is by no means a sure thing, but it is actually a non-zero statistical possibility, so we end on another hopeful note with the following: "Typically speaking, La Niñas turn out dry for Southern California, and El Niños turn out wet – but not always (my emphasis)," says Paul Duginski, a graphics and data visualization journalist with the Los Angeles Times. He explains at least one notable exception by way of example: "The 143-year annual average rainfall for downtown Los Angeles is 14.93 inches. In 2001, 17.94 inches of rain fell, and in 2017 (Super Bloom year in Borrego – ed), 19 inches fell. Both were weak La Niña years." So, there is a hope, albeit a tiny, odds-against, and caveat-laden La Niña-related sliver at that.

But hope is not, like they say, a strategy. If we get rains this season, and/or perhaps the next, great. If not, well, that's life in the desert, and our only reliable, time-proven strategy involves both individual and perhaps collective coping mechanisms deployed for the situation at hand.