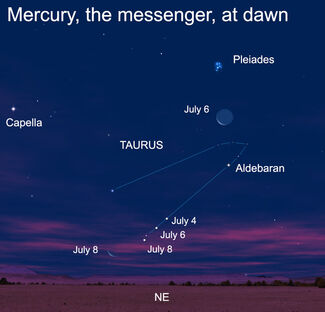 It's amazing how things from our childhood can stick with us throughout our lives.

I was in fourth grade when I learned that Mercury is the nearest planet to the sun and that it orbits only 36 million miles from our star's scorching face. Pretty heady stuff for a 9-year-old back then, but it wasn't until many years later that I actually got a chance to see Mercury for myself.

Part of the delay came because the planet is quite elusive and can never be seen in a completely dark sky. Its 88-day orbit around the sun causes it to swing from dawn to dusk, or from dusk to dawn, just about every month and a half. And this means that one has to be outdoors at just the right time – and with sky conditions just right – to see it.

Its elusiveness is legendary; it's been said that the great 16th-century Polish astronomer Nicolaus Copernicus – who overturned the long-held notion that the Earth occupied the center of our planetary family – had never actually seen this world with his own eyes. Now I can't say if this is true or not, but it certainly makes sense given what we know about weather conditions in Eastern Europe and how tricky this planet is to see.

Well, the next two weeks provide us an opportunity to do what is believed that the great Copernicus could never do: see Mercury.

To find it, head outdoors an hour or so before sunrise, and begin scanning very low in the east-northeastern sky with binoculars. There among the stars of Taurus, including the yellow-orange Aldebaran, you may spot Mercury as a bright, flickering "star" to the lower left of Aldebaran and appearing only about 10 degrees or so above the horizon.

Over the next couple of weeks, Mercury will seem to move slightly in front of the more distant stars, but on July 8, even though it will appear considerably lower in the early morning sky, we'll have an easy shot at finding it. Half an hour or so before sunrise that morning, look for Mercury to lie to the right of the thin crescent moon – a delightful sight in binoculars during the waning light of dusk.

By the following morning, the moon will have moved along its orbit and will have disappeared from view, leaving you to find Mercury without much help.

You can also try aiming a small, low-powered telescope in the direction of this planet, but you may be disappointed by what you see. First off, this planet is rather small – barely the size of the continental United States. And secondly, its appearance near the horizon means that its light must pass through a tremendous amount of distorting atmosphere before reaching our eyes.

If you're fortunate to get a relatively steady image, you might check it out with a higher-powered eyepiece. You'll notice that Mercury appears not as a circular disk but as a thick crescent that will become thinner throughout the coming week.

It took me many years to finally catch a glimpse of this elusive planet but, believe me, I've found it well worth the effort!