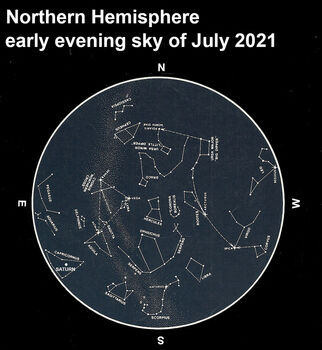 Beginner stargazers may think it's tough to find our way around the night sky, with so many stars and constellations to try to identify. But during weeks like this when the moon is bright, only the brightest stars appear, and our task becomes much easier. This is where learning to read a simple star map comes in handy.

Since our planet's daily rotation and annual journey around the sun cause our sky to change constantly, the map here represents the sky we see during the early evening hours of July 2021. Notice that it's surrounded by a circle that represents the horizon – the imaginary boundary between sky and ground; the map's center marks the zenith, or overhead point. And along its edge, you'll find letters representing the cardinal directions of north, east, south and west.

Within the boundaries of the star map, each dot represents a star (or planet): the larger the dot, the brighter the star it represents. And to help organize the heavens into recognizable segments, traditional star patterns are outlined by lines. Simple enough so far.

But putting a star map to use is where many people give up. The trick is, unlike a roadmap that is held in a normal reading position, a star map must be held overhead, with its cardinal points aligned to the actual directions. Once we learn this, we're halfway there.

Star maps can be used in two ways. First, we can go from the sky to the map. Suppose, for example, we spot a large triangle of bright stars about halfway from the eastern horizon to the zenith. A glance at the map shows that this grouping may be the outline of the Summer Triangle, also the home of three separate constellations.

The other way to use the map is to go from the map to the sky. Suppose we want to find the constellation Scorpius, the scorpion; the map shows it sitting low in the southern sky after dark in July, so that's where we must look for it in the heavens.

Once we find one or two such star groupings – no matter which technique we choose to do it – we'll be on our way to finding more. Now we can use those as markers in the sky to "hop" our way around to others.

The biggest surprise in store for most stargazers is that the star patterns in the sky appear much larger than they do on the map. Why this is such a shock to some is puzzling to me because, just as cities and distances between them appear smaller on a road map than they do in reality, so do the constellations and star groupings on a star map. The map is, after all, only a scale model of the real sky. Once we grasp this difference in scale, finding our way around the sky becomes relatively simple.

To get a star map for each month, you can check the current issues of "Sky & Telescope" and "Astronomy" magazines at your local library or bookstore, or you can search online for interactive star maps that you can download to use under the sky.