Four Planets and a Moon 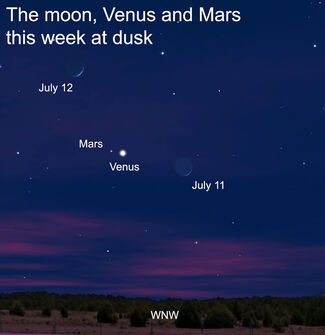 Last week, I showed you how to spot the elusive planet Mercury, the nearest planet to the sun. This week, you can easily see the rest of the inner Solar system, and you don't have to rise before dawn!

If you've been out on these warm summer evenings, you've probably noticed a brilliant light low in the western sky at dusk. Readers of this column almost certainly recognize it as the planet Venus.

Mars is there, too, but I'll bet you haven't noticed it; if not, you're not alone. Venus commands such attention that noticing anything else in that part of the sky is tough.

Right now, Mars lies about as far from us as it can ever get – about 231 million miles – and as such appears nearly 200 times fainter than Venus.

Venus, too, lies on the opposite side of the sun – about 133 million miles – but unlike Mars, it will soon be rounding the sun and becoming much closer and brighter in our sky.

Though these two Solar system worlds are quite far apart, they now appear close in the western sky at dusk. This, of course, is purely an optical illusion, with both planets just appearing along nearly the same line of sight.

On the evening of Sunday July 11, check out this pair about 30 or 40 minutes after sunset. If you have a low western horizon, you may also spot the waxing crescent moon, just two days from its new phase. This will be tough, but you can use binoculars to scan the sky for it to the lower right of Venus.

By the following night, you will notice that the moon now lies to the upper left of the pair, the result of its monthly orbital motion around the Earth. It now appears as a slightly thicker crescent, complete with a full disk of "earthshine", which is sunlight reflecting back onto the lunar dark side from the Earth itself.

But that's not the only change. Venus has also moved slightly; on this night, Venus and Mars will lie only half a degree apart. This means that if you have a small, low-powered telescope, you should be able to see both planets in the same field of view that night. Don't expect to see much, however. With both worlds lying so far away, they will appear as just dots of light.

Aim binoculars in the direction of these worlds, and you'll be amazed by the picture they create.

And speaking of pretty pictures, why not try photographing the scene. You don't need fancy or expensive equipment; a camera and tripod will do just fine, though a zoom lens will help. If you shoot around 30 to 40 minutes after sunset, you can probably trust your camera's automatic settings. If not, try setting your camera to ISO 100 or 200 and shooting 1/3 of a second or so at F/8.

So now you have seen all the worlds of our inner Solar system: Mercury, Venus and Mars – even the moon. Oh, wait, there's one other planet I didn't mention. Can you name it? Hint: it's visible every night (and day)!