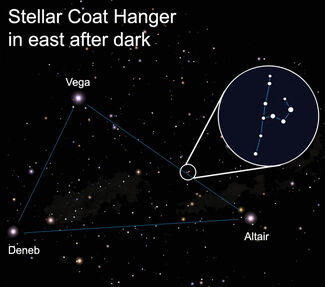 With the hottest time of year now approaching us in the Earth's Northern Hemisphere, it's hard to imagine that cooler days will ever arrive. This is especially true, here, in the Desert Southwest, where I've been sweltering under daytime highs of about 120º F.

The only thing that has kept me going is the knowledge that seasons will change, and within only a few months, cooler weather will be back. Until that happens, however, most of us have our winter clothing tucked out of sight for the summer. If you have the same luck as I have, I'm guessing you always seem to find fewer hangers than pieces of clothing you need to hang.

Where these things go is anyone's guess, but Mother Nature seems to offer a solution in the heavens. It's called the Coat Hanger, and it's one of the prettiest star groupings visible this time of year. To find it, go outdoors shortly after dark and locate the summer triangle, outlined by the three brightest stars halfway up in the eastern sky: Vega, Altair and Deneb. Vega is the brightest of the three; below and to its southeast lies Altair; and to its northeast – the faintest of the trio – lies Deneb.

Along the triangle's southwestern side – about one-third of the way from Altair to Vega – you might spot a hazy region of light if the sky is dark and your vision is good. This unusual spot was described some 1,057 years ago by the Persian astronomer Al Sufi in his "Book of Fixed Stars." Of course, without the benefit of an optical aid, Al Sufi did not know exactly what he was seeing, except that it appeared as a fuzzy patch of light on the western edge of the Milky Way.

Today, things are much different. Even the cheapest binoculars aimed in this direction will offer you quite a visual treat. Here you'll see ten faint stars that outline a perfect shape of a tiny sideways coat hanger – a straight line of six with a "hook" of four on one side.

Of course, stars are distributed randomly throughout space, and the figure we see is simply the result of the human mind's attempt to make order out of this randomness. In fact, look at any area of stars in the sky and, given enough time and imagination, you will almost always be able to devise recognizable figures that we call asterisms.

The Coat Hanger, known to astronomers as Brocchi's Cluster or more formally as Collinder 399, is probably not a star cluster at all. It was in the 1970s and 1980s that astronomers began to suspect that many of its stars might be moving together as if part of a stellar family. However, thanks to observations by the European Space Agency's Hipparcos satellite, it appears that the stars of the Coat Hanger may be separated by hundreds of light years and are drifting through space in arbitrary directions and speeds. In other words, these stars may not be part of a cluster after all.

Cluster or not, this is one cool sight on these warm summer nights!