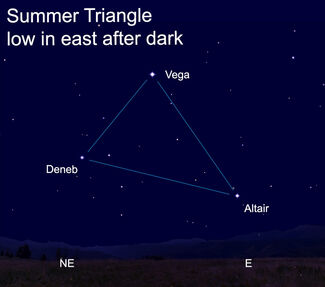 With the brilliant moon in our sky this week, stargazers must settle for viewing bright stars. And there are no brighter stars of the season than those of the summer triangle, now appearing low in the eastern sky after dark.

The summer triangle is not an official constellation but rather an asterism: a group of stars that we can trace to resemble something familiar. In fact, each of its three bright stars – Vega, Deneb and Altair – is the brightest of its own separate constellation. But that doesn't mean that early storytellers have passed over this prominent star grouping.

For example, an ancient Chinese love tale says that Deneb represents a magpie bridge over the Milky Way, which allows the separated lovers, Altair and Vega, to be reunited on only one summer night each year.

The brightest of the stellar trio – and highest in the sky this week – is Vega: the most prominent star in the tiny constellation of Lyra, the harp. This brilliant white star lies about 150 trillion miles from us (about 25 light years). It is about two-and-a-half times larger and shines some 50 times more brilliantly than our sun. Because it burns so rapidly, astronomers believe that Vega will probably exhaust its fuel in only one-tenth the time as our sun, making its expected life span only about one billion years.

Movie buffs may remember this star as the one from which radio astronomers in the 1997 fictional motion picture "Contact" detected intelligent signals. I guess that would make Vega ... heh heh ... a movie star!

The southeasternmost of the three stars is Altair: the brightest in the constellation of Aquila, the eagle. Its name comes from the Arabic Al Nasr al Tair, which means "the flying eagle" in English. Altair lies about 96 trillion miles (17 light years) from us. In other words, the light from this star that strikes our eyes tonight has been traveling through space since 2004.

Not only is Altair one of the nearest stars in our sky, but it's also one of the most rapidly rotating. Astronomers have determined that this white star spins once every 6.5 hours, completing nearly four rotations for every one made by the Earth. Because of this rapid spin, astronomers think that centrifugal force may compress Altair so much that it might appear more like an egg than a sphere.

Finally, Deneb lies farthest to the north, marking the tail of the great swan Cygnus, which is more easily recognized as the Northern Cross. Though they're not sure, astronomers think that Deneb lies some 15,400 trillion miles (about 2,600 light years) from us – so far that we see it tonight as it appeared around 600 B.C. – around the time it is said that Babylonian King Nebuchadnezzar II was building the Hanging Gardens. The light leaving the star tonight won't arrive here until the 47th century!

If it is that distant, Deneb could be one of the most brilliant in our entire galaxy. With a luminosity equivalent to 200,000 suns, it would generate more light in one day than our sun has produced since the days of Marco Polo at the end of the 13th century!