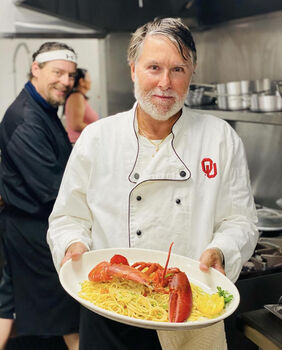 I thought it was time to visit The Propeller Bar & Grill at the Borrego Valley Airport, as I have been reading the many comments on Facebook, and have also been waiting three years for it to open.

Upon entering the restaurant, I was taken back by the decor, not what I was expecting, I thought it would be an airport type diner, not an upmarket looking restaurant. A long bar was situated in front of the panoramic windows, looking out over the airstrip. Whilst in the main restaurant, there was a community table seating 20 people. The airplane paintings, murals and pictures made it really special and engulfed you in a world of the airplane. We sat in the bistro part of the restaurant with bench seating and red chairs, which a number of restaurants seem to have today.

Time to eat. I was surprised to see on the menu, freshly cooked Maine lobster. I was told they were brought in live and cooked on the premises so I had to try this. My partner plumped for the hamburger, which was made by grounding prime beef sirloin in-house, then made into a burger with their own recipe. It took quite a time for our food to arrive, about 30 minutes, not two hours as quoted by some people on Facebook, an exaggeration I think. I thought it was amazing to be sitting in Borrego Springs eating a delicious lobster, and having a great view of the mountains at the same time.

I was brought a house martini made by Gerry, the bar man, best one in town. I have seem him at other establishments, especially the Arches at the Borrego Springs Resort where he worked with Morgan, now the manager at the Propeller. Great team.

I then ordered another martini as it was so good (I was not driving). The lobster was excellent, but it took some cracking as it came with claw and all. Could be more cracked in the kitchen. The spaghetti it was served on was also very good. My partner thought the hamburger was outstanding, different to the others served at the establishments 'round town, it should be at $20. He was not that pleased with the french fries, he thought they should be crispier although they are freshly peeled and cut on the premises, as we were told by Gerry. The atmosphere and ambiance was different, but slightly noisy as it seems to be at most happening establishments, people seem to like the buzz. The community table was fully occupied and the diners were having a good time, albeit again, very noisy. There appeared to be a party atmosphere with people table hopping, as they all seemed to know each other.

An interesting addition to Borrego, and yes, there is also a viewing terrace upstairs with a bar. This will be open in the coming season.

So all-in-all, a pleasant experience, good food, good atmosphere if you like buzzing places; will certainly come here again. The bar works really well for that "end of the day" drink. Cheers.