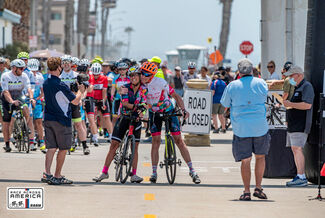 Photo Courtesy of Race Across America

The temperature in Borrego Springs on Saturday June 17 reached 117º F as Shane Trotter raced quickly down the "Glass Elevator," aka the Montezuma Grade. He was one of the two "Speed Cowboys" in the 928-mile Race Across the West (RAW), from Oceanside to Durango, Colorado, and he reached Christmas Circle about 4 p.m. The 2-person (Under-50) pairing Trotter and Tyler Pearce was already 90-minutes ahead of the next 2-person team. It was a harbinger of things to come.

The Speed Cowboys (Bib#R204) had pulled ahead near Bonsall, and a short time later were practically sprinting up the challenging Pala Grade towards Lake Henshaw, and they never looked back.

Leading not only their own category but also the entire field of 2-4-8-person teams for the entire race, the Speed Cowboys put on a speed-endurance combination that resulted in a literal shattering of the elusive 48-hour RAW barrier, besting the previous 2018 record time with a 1-day, 22-hr, 40-min. record, and by more than three hours. Not minutes, hours! And with an average speed of 19.9 mph, theirs was also the highest average speed of all the teams.

As we went to press on June 21, we received comments and a photo from the Speed Cowboys team and crew. Team spokesperson Christine Gerth reported they not only reached their first goal of finishing this physically exhausting and logistically complex race, but they reached their second goal, set prior to the race, of breaking the RAW record; a critical race milestone was the speedy climb up the Pala Grade. Struggling with the intense desert heat was also a factor for both Trotter and Pearce, but they powered through it. Team spokesperson Christine Gerth said the key to this victory was "everyone – cyclists and crew – working together." And one minor glitch: They were told of a pending 1-hour time penalty for a race-timer power plug that came loose at one of the timing stations, but the official results do not reflect the penalty. Regardless, they would still have broken the 48-hour barrier.

"Team Figgy" included a local resident at the de Anza Country Club, Sylvia Maas, and her cycling partner George Thomas, in the 2-person (50-59) Mixed category. They finished the race in a time of 2-days, 17-hrs, 51-mins, 3-mph faster than the nearest RAW racing team and were the category champs, with the only other team in their category, "Cycling for Water," not finishing.

The 2020 races were canceled due to the uncertainty of the coronavirus pandemic, Race Across America and Race Across the West (RAAM/RAW) was back for 2021.

The annual race, dubbed to one of the most challenge endurance events and the world's longest time trial, did not take place for the first time since its inception in 1982.

More coverage of both the RAW and RAAM events will appear in the next issue.