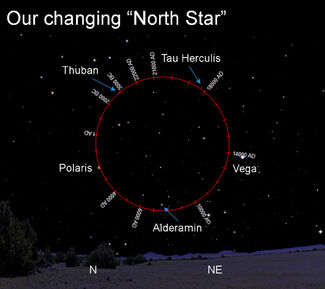 Of all the stars in the heavens, one appears to stand firmly in place. It's not the brightest of stars, as many people believe. It's actually the 48th brightest star, and you will have trouble finding it from under the light pollution of a large city. But it's always there, in the same position, no matter what time of night or which season you happen to glance skyward. It conveniently marks the "north celestial pole" – the spot toward which our planet's rotational axis points

Its name is Polaris, but it's more commonly known as the North Star.

Throughout the centuries, writers and philosophers have recognized Polaris as a sign of constancy and faithfulness. To Northern Hemisphere navigators, it was a steady light they could use to safely guide their ships. Cultures throughout Asia have long recognized its prominent position as the pinnacle of the cosmic "Mountain of the World" or "Axis of the Universe." In traditional Indian astronomy, its Sanskrit name is "dhruva tara," which literally means "fixed star."

Even the 16th-century English poet and playwright William Shakespeare weighed in on the steadfastness of this celestial beacon in his "Sonnet 116": "(Love) is the star to every wand'ring bark, / Whose worth's unknown, although his height be taken."

Astronomers, of course, know Polaris as the star that shines nearly directly over the Earth's north pole and, as the world whirls on its daily, annular path, causes the stars to appear to wheel endlessly around it.

But this is purely a cosmic coincidence. As permanent as Polaris might appear, it has not always occupied the role of North Star. This is because Earth doesn't spin perfectly on its axis but wobbles a bit as it travels its cosmic journey.

We can easily see this "precession" effect in a spinning top. As the top spins about its axis, it eventually slows down and begins to wobble. The axis about which the top turns no longer points in a single direction, but instead traces a much larger circle.

Our Earth behaves similarly, and over time, its rotational axis traces a giant circle among the stars. How much time? It needs about 25,800 years to complete one cycle.

For much of modern history, the rotational axis of the Earth has pointed roughly toward Polaris, but this hasn't always been the case. For example, when the ancient Egyptians were building pyramids 50 centuries ago, they knew a different North Star. At that time, the star Thuban in the constellation of Draco, the dragon, appeared quite close to the north celestial pole and served this important function.

Wait around for a while and you'll see the pole star gradually change again. Over the next few millennia, Polaris will drift farther from its central position as other, fainter stars take over that role. In another 55 centuries, the star Alderamin in Cepheus, the king, will occupy that position. And by A.D. 14,000, the bright star Vega will lie closest to the north celestial pole.

Of course, Polaris will return to its starring role as our North Star, but we'll have to wait until the 278th century!