Moon and Venus at Dusk 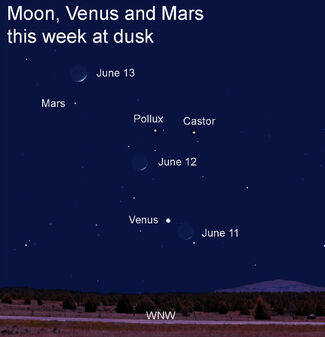 On June 11, the delicate crescent moon will appear just below brilliant Venus and will form a magnificent sight in the waning light of dusk.

Have you noticed the remarkable jewel sparkling low in the western sky after sunset? That is the planet Venus, returning to the evening sky after being visible for many months only to pre-dawn risers.

Some may have missed it because of clouds or terrain blocking the view, but as June progresses, you'll see Venus appearing higher in the sky from night to night as it rounds the sun in our direction.

As people spot its brilliant light for the first time, misconceptions about just what it is will begin to pop up. Of course, I hope regular readers of this column won't fall prey to these misunderstandings, but you may encounter some in your interactions with other, less experienced stargazers.

One of the most common misconceptions of novice sky watchers is that the light of Venus is an approaching aircraft with its landing light on. If you live near a major airport, it's an easy mistake to make; truth be told, I fell for this once myself!

Another common thought is that it's the International Space Station, or the ISS. While the ISS can occasionally appear as bright as Venus, it orbits the Earth at 17,000 miles per hour, and it appears to sail smoothly across our sky. Venus doesn't.

Perhaps most puzzling to me is that some folks believe that this celestial beacon is the North Star. I guess its appearance in the west doesn't bother them!

Whenever you encounter misconceptions such as these – and I'm sure you will – be patient and take time to explain what people are actually seeing. Helping others enjoy the wonders of the night sky is a tremendously rewarding way of spending your time.

Ever since childhood, I've enjoyed the company of Venus in the glow of twilight, especially when it's nuzzled up against the delicate crescent moon. Fortunately, this sight is not all that uncommon, occurring once a month or so as the moon orbits our planet. And such a pairing is coming up later this week.

On June 11, the delicate crescent moon will appear just below brilliant Venus and will form a magnificent sight in the waning light of dusk. By June 13, it will appear above the currently very faint planet Mars.

As you admire Venus and the moon, be sure to check the pair out with binoculars, since few celestial sights appear more three-dimensional. You'll surely enjoy seeing the faint disk of the full moon, which is the result of sunlight reflected off the Earth back onto the dark side of the moon.

The appearance of this ghostly glow was first explained by the famous 15th-century Italian artist and inventor Leonardo da Vinci.

He recognized that when the moon appears as a crescent in our sky, a hypothetical lunar astronomer would see a nearly full Earth in the lunar sky. And, just as a bright moon illuminates the dark night on Earth, a bright Earth would illuminate the moon's darkness even more. Today we call this phenomenon "Earthshine."

I hope you'll mark your calendars for this week's beautiful sky show. I know I'll be out keeping watch at dusk, reliving fond memories that extend way back to my childhood.