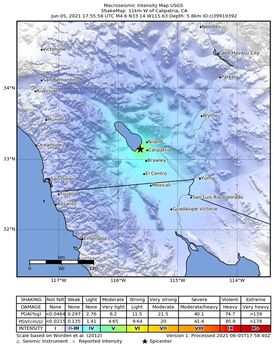 Over 100 earthquakes, the largest of which had a magnitude-5.3, shook near the Salton Sea on June 5, sending light tremors in various areas.

The earthquakes, ranging from 2.5 to 5.3 magnitudes occurred in Calipatria, along the San Andreas Fault.

The series of temblors began at around 11 a.m., with the largest quake occurring at 10:55 a.m. with a depth of three miles, according to the USGS.

The epicenter of the earthquake was located about seven miles west of Calipatria and 25 miles north of El Centro.

More than a dozen quakes shook the Calipatria area later that night, with magnitudes ranging between 2.5 and 3.2.

There were no reports of injuries or serious structural damages.

A similar swarm of earthquakes occurred on Sept. 30, 2020, when hundreds of quakes, the largest a magnitude-4.9, rattled south of the Salton Sea, and was felt in the counties of Riverside and San Diego.

In a two-and-a-half hour span, 45 earthquakes of at least a magnitude-3.0 struck the Westmorland area. By 8 p.m. the same day, 240 more quakes were recorded by the USGS.

These quakes happened in the Brawley Seismic Zone, a network of small faults that connect the San Andreas and Imperial faults. This is one of the largest swarms in the Imperial Valley – and it is historically the most active swarm in Southern California.

Historically, the largest quake in that zone measured 5.9 in 1981.

The Brawley Seismic Zone is too far from the San Andreas Fault to change the probability of a quake occurring there, seismologist Lucy Jones added. Jones was formerly with the U.S. Geological Survey.

Determining when another series of earthquakes will happen or when the big one will hit California is not realistic. We often think that the weather also helps us predict when an earthquake will strike.

"Quakes are so far down on the earth's surface that weather doesn't change what's happening," Jones said. "There's a tradition of earthquake weather in every culture with earthquakes, because we want to have a pattern."

But what you can predict is your own preparedness.

"We need that muscle memory of getting under the table to remember that's the right thing to do," Jones said. "I wouldn't worry about it particularly today, these are just too far away, but in the long run you're in one of the most active places of California."