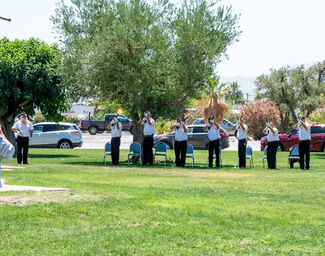 Like many towns around the world, Borrego Springs observed the Memorial Day holiday on Monday May 31. At Christmas Circle, townsfolk and visitors alike were in attendance, while following social distancing rules and regulations. The event began with the posting of the Colors, Pledge of Allegiance and our National Anthem. Music was also provided by the Smith Mountain Boys, Dutch and Bruce. Commander Lee Quarcelino was the emcee for the day, and American Legion Women's Auxiliary Past President Karen Bobren shared a few words during the ceremony. To conclude the ceremony, a heartfelt rendition of "Taps" was played, and the rifle team did the final 21-gun salute.