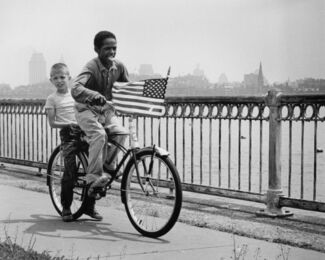 "I am not certain of just what message you will receive from the things that I share with you today, but there is one thing that I would like to feel has been made evident, and that is my deep and abiding belief in the value of ethnic and cultural identity for the many groups that made up the mosaic of the American society." -Major Morris

A new exhibit, titled "Gettin' Along," opened at the Borrego Art Institute featuring the photography of the late Major Morris (1921 – 2016)

The exhibit, titled "Gettin' Along," includes a collection of 42 black-and-white documentary photographs, primarily taken in Boston and Philadelphia during the 1960s, captured scenes of inner-city life, such as culturally diverse children playing together and the Poor People's March in Washington D.C. in 1968.

Born in 1921, Major Morris grew up in the poverty-stricken West End of Cincinnati.

After the Civil Rights era, Morris, a World War II veteran who had dropped out of high school to help support the family, earned a master's degree from Harvard University and became an educator, training teachers in diversity and cultural sensitivity.

Later he worked as an affirmative action officer at Portland State University in Portland, Oregon.

Morris began his photographic pursuits as a laboratory technician in the 1950s at Massachusetts Institute of Technology (MIT), where he learned the art of creating photographs. One of Morris's earliest public showings was in a gallery of the Arlington Street Church of Boston. Later, some selected images were shown at the DeCordova Museum of Lincoln, Massachusetts., in "The New England Experience," an exhibition featuring the work of outstanding photographers. His photographs appeared in a wide range of publications, focusing on his urban images, which offered insightful social commentary.

After a productive and satisfying career as an educator, Major Morris retired to Escondido.

He resumed his photographic activities and wrote about his life's experiences.

His photographs featured in numerous exhibits throughout the county. He self-published two books, "Nurture Their Dreams," a photo book of a number of his well-known black-and-white photographs, and "Escape from Black Bottom," an anthology that he dedicated to "Grandmothers who nurture children's dreams."

Both books are available in the gallery.

The exhibit will be at the Borrego Art Institute, North Gallery from May 8 to September 26.