Star-Hopping From the Big Dipper 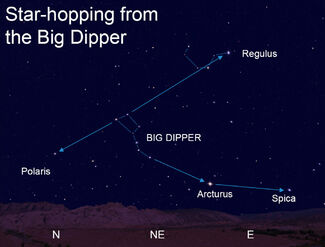 One of the most common questions I hear under the starry night sky is, "How do I find the North Star?"

The North Star, also known as Polaris, is important because it stands directly over the Earth's geographic north pole, so if you face this star, you're looking true north. Don't expect your compass to point that direction, however; it aligns instead with the Earth's magnetic north pole.

Many folks believe that the North Star is the brightest star in all the heavens. If you're one of them, you may be disappointed to learn that it's not. Not only is it not the brightest, but it's actually quite faint. Ranking just 48th in brightness, it may be tough to spot in a sky filled with light pollution or moonlight. (Of course, it's not visible at all to our friends in the Southern Hemisphere.)

Locating it is pretty easy once you can recognize some stars and star patterns in the northern sky. If you had to choose only one stellar grouping to learn, I would recommend that it be the Big Dipper. This is one of the most useful star patterns at this time of year, and it can help you find much more than the North Star.

Let's begin by going outdoors after dark. High in the north-northeastern sky, you'll find the seven equally bright stars of the Big Dipper, so named because these stars appear to trace a ladle with a bent handle. The Dipper is an asterism (a group of stars that looks like something) that is part of the large constellation Ursa Major, the Great Bear.

The two stars of the Dipper's bowl farthest from the handle are known as the "pointer stars." If you connect these pointers with an imaginary line and extend that line about five times its length, it takes you right to Polaris at any time of night or any season that the Dipper is visible.

What if we were to follow those pointer stars in the opposite direction? Well, we'd have to extend that line a bit farther, but it would eventually lead us toward the 21st brightest star, named Regulus. Its name comes from the Latin word "Rex," meaning "king," and it forms the major star in the constellation of Leo, the lion.

Imagining the image of a lion among the stars of Leo is tough, but notice instead that Regulus forms the dot at the bottom of a backward question mark of stars!

The Dipper's handle is useful as well. Following its curvature away from the bowl leads us to Arcturus, a yellowish-orange star, and Spica, with more of a bluish-white color. Simply follow its arc to Arcturus, and then speed on to Spica!

Arcturus is the fourth brightest star in the night sky, and its name derives from the ancient Greek word "Arktouros," meaning "Bear Guard," because it hovers so close to the Great Bear. Spica is a bluish-white star that is the 16th brightest star overall.

While Polaris remains constantly in place, the Dipper, Regulus, Arcturus and Spica will drift slightly farther west each evening, offering some beautiful sights throughout the spring and summer months.