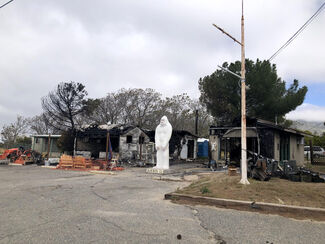 After a tragic fire broke out, causing over $350,000 worth of damages to the Montezuma Valley Market in Ranchita on April 18, a family is now attempting to rebuild what was lost.

Crews responded to the fire at around 1:30 a.m., and when firefighters arrived at the scene, the store was fully engulfed in flames. The fire spread so rapidly to the real estate office next door, according to CalFire spokesman Thomas Shoots.

Firefighters on the scene managed to salvage parts of the real estate office, but unfortunately, not the market, which lost all its contents.

No injuries were reported, and the cause of the fire is still under investigation.

The Montezuma Valley Market has been under new management for the last few years under the Pavlocak family.

Owners Mike and Kemi Pavlocak have poured their hearts into building the business, and it is a dream of two people, who served their country in the military, and planned to make improvements for the local community.

The market had a bit of everything one may need, from road trip snacks and drinks, fun arcade games, locally made items like honey and accessories, and even a beer garden that opened in Feb. 2020.

As things were beginning to grow, the COVID-19 pandemic hit, and like many businesses, they were forced to shut their doors. For a couple of weeks, things were steady, and they were able to pay employees, but with the long lasting closure of multiple businesses for safety, it was an uphill battle and the future was unclear. Though, it never affected their enthusiastic attitudes and will to provide what they could during trying times.

Prior to the fire, the Pavlocak's learned their daughter had cancer and began chemotherapy, which will continue for some time. The insurance will barely cover the cost of the inventory that was lost.

A GoFundMe has been organized by Chesney Hoagland-Fuchs on behalf of the Pavlocak's, and so far have raised over $18,000. If you are interested in helping, you can donate here: https://www.gofundme.com/f/help-montezuma-market.

A fundraiser, "Ride to the Yeti" has also been put together and is scheduled for May 15, where cyclists will ride from Christmas Circle up the Montezuma Grade to the Montezuma Valley Market parking lot. They will be meeting at the Circle at 7 a.m.

There will be refreshments, a car show, raffle, and a BBQ by Mike Pavlocak, and t-shirts (for a donation).

There will be updates on the fundraiser on our website (www.borregosun.com) and in the May 13 issue of the Borrego Sun.