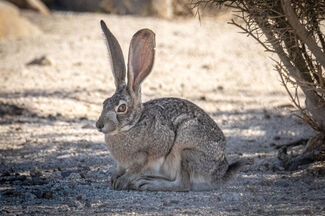 According to the California Department of Food and Agriculture in April, the virus was confirmed in domestic rabbits at 38 backyard locations in Southern California since July 2020, including Borrego Springs.

The first case of the virus in California was reported after discovery of a dead black-tailed jackrabbit in Palm Springs last year.

Since then, there have been diseased rabbits found locally in Poway, Jamul, Ramona, Santee and Borrego Springs.

On April 8, two rabbit carcasses were found in the Canada de San Vicente Ecological Reserve in Ramona, and Wildlife officials said they tested positive for RHDV2.

RHDV2 is not related to coronavirus and does not affect humans or domestic animals other than rabbits and is only transmitted by direct contact with infected rabbits.

The virus can also be transmitted indirectly by shared bedding, feed, water, feces and fomites. The illness can also withstand both dry, as well as hot conditions.

Without any reasonable method of distributing a vaccine to wild animals, the disease is expected to continue spreading.

The numbers of confirmed cases are still relatively low – in the dozens – but entire food chains could take a hit if staple species of prey like jackrabbits decline. Rabbit populations might be poised to take a large hit, as the disease can cause up to 90% mortality, according to Hayley Lanier, assistant curator for mammals at the Sam Noble Museum in Oklahoma and co-chair of the International Union for Conservation of Nature's lagomorph specialist group.

"That has huge implications for not just rabbits but everything that eats rabbits," Lanier explained. "Rabbits are this very important segment of the food chain. This virus is like the rabbit version of Ebola. This is pretty serious."

The virus appears to only harm certain species of lagomorphs, so it doesn't yet pose a danger directly to other wildlife or humans. But, if rabbits are no longer an abundant food supply, that would shift the balance of entire ecosystems.

Researchers are also concerned about the possibility that rabbit hemorrhagic disease could wipe out species that are already on the brink. In California, this means the riparian brush rabbit, which is the only species of rabbit that's listed as endangered under both the relevant state and federal acts.

If the virus spreads into areas where riparian brush rabbits live, it could quickly send this small growing population back towards extinction. Experts said it's not yet clear what caused the outbreak, with Lanier suggesting that the virus might have mutated or evolved in a way that aided its dispersal or that a domestic breeder might have unknowingly dumped the carcasses of their infected rabbits.

Residents are being asked to notify The California Department of Fish and Wildlife of sick or dead wild rabbits, hares, or pikas by calling 916-358-2790 or online at https://wildlife.ca.gov/Conservation/Laboratories/Wildlife-Health/Monitoring/Mortality-Report. RThose who may have come across these sick or dead animals are asked to disinfect their shoes and wash their hands if in the impacted area.

Outdoor recreationists should take precaution when hiking, camping or backpacking and avoid handling or disturbing carcasses to minimize the potential spread of RHDV2.

Additionally, owners of domestic rabbits can protect their animals in the following ways:

- Keep your rabbit indoors. Do not let your rabbit come into physical contact with other rabbits from outside your home.

- Wash your hands before and after handling your rabbit.

- Change your clothes if you have come in contact with other rabbits.

- Disinfect shoes and other objects that may be contaminated.

- Know your hay and feed sources. Only purchase from a trusted manufacturer.

- Do not feed foraged plants, grasses or tree branches.

- Install window and door screens to eliminate mosquitos and flies inside.

- Quarantine any new rabbit in the home for at least 10 days.

- Use rabbit safe monthly flea treatment (as prescribed by your veterinarian only) for rabbits, cats and dogs, especially if any pets go outside.