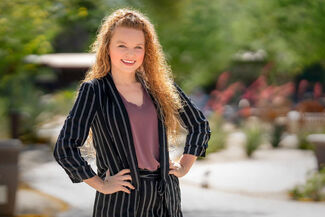 Kasey Simrock – a name that many recognize, and when you see her, you can't help but notice that huge smile on her face. However, that smiling, jubilant and radiant character you'll find happily wandering La Casa Del Zorro or talking it up with you at the weekly Sundowners, will be no longer.

Kasey Simrock has announced she is departing La Casa Del Zorro after nearly four years. It was surely a bittersweet decision, but Simrock felt that it was time to move on.

"I have my family and grandparents in the city that I need and would love to be back with," she said.

Simrock moved to Borrego Springs from San Diego when she was 21 to be closer to her mother, step-father and grandmother who were already living in Borrego, and said it was an opportunity for her to grow.

"I wanted to build my resume, and find a new career. I studied Occupational Therapy in college, but decided that was not the career for me," she said.

After asking her mother where she should apply, she suggested La Casa del Zorro. And after walking into the lobby and giving herself a tour, she immediately fell in love with the place. Simrock was hired two days later, and was more than enthusiastic to begin her journey. That journey then turned into three years full of constant learning experiences and growth.

Simrock began at La Casa in October 2017, when she was hired by then-General Manager Patrick Sampson.

Within just two days and two shifts as a hostess, Simrock was asked to be the Sales Manager: Group Sales and Catering for La Casa by Patrick and Tiffany Sampson. Despite having no background or schooling for her job role, it did not stop her from doing what she could to learn and be an essential key component for the business. She took on that challenge, and it is safe to say that she has done a fine job coordinating and organizing various sales ideas to help the business grow.

Previously, she had worked in banking and cocktail waitressing, and studied Occupational Therapy at Grossmont College in El Cajon.

Simrock noted that Patrick Sampson was the "guru," who taught her about the hospitality business.

Aside from being the Sales Manager, Simrock was also in charge of social media marketing; local marketing for the resort, reservations/front desk supervisor, and rate management.

When Patrick Sampson left LCDZ in October 2019, Simrock took on more duties for the Front Desk, Room Sales and Promotions, and assisting Resident Manager (Curly Williams) with overall resort operations. In Feb. 2021, when La Casa was able to reopen after closures due to the COVID-29 pandemic, she became the Front Office Manager, and continued to be the Sales and Marketing Manager.

However, it was time for Simrock to move on, and will take her talents as she goes. Her last day at La Casa is April 30.

In addition to learning from Patrick Sampson and Mr. Jens Neelsen, Simrock said some of the best memories she has of La Casa was the grand 2019 New Year's Eve party with Ruby and the Redhots playing, as well as the ice cream socials hosted for the children during the blazing hot summers.

"I love the small town community and the strength the community has for one another. My favorite place is La Casa. I love walking the property and seeing the guests on vacation enjoying all we have to offer here and in Borrego Springs.

Simrock hopes to enjoy time with her grandparents and sister, and hopes to venture off into her next career in hospitality. She states she will remain close with La Casa del Zorro and the management team, CWC.

What you may see on her resume is full of all the roles she took on, but what it doesn't show is much more valuable, and that is the jubilant personality that she embodies and how welcomed she made you feel.

Kasey Simrock was a joy to work with, and the Borrego Sun wishes all the best to her and future endeavors.