Hammerheads Back in Borrego 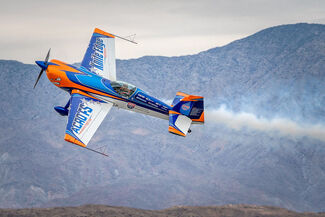 The International Aerobatic Club (IAC) Chapter 36 San Diego Hammerheads were back for the Spring Roundup competition from April 29 – May 1 at the Borrego Valley Airport. And despite the warm weather, that did not stop folks from enjoying the competition (at a safe distance of course), where pilots soared through the sky.

"It was wonderful to be back in Borrego, if a bit hot and windy," Contest Director Bryan Jones said. "It was a little hotter than we're used to, since our contest usually runs in early April rather than late April. Still, Borrego is home for IAC36 and it's the finest aerobatic box in the country."

Thirty seven pilots competed in this year's spring competition. Jones noted a few regulars were unable to make it, but the contest featured new competitors –Alex Coats and Hudson Davis.

Some notable names like Howard Kirker, Jim Bourke and Susan Bell were back to compete, setting high standards.

"Bluebird (of Happiness) was originally a 300SR raced by Nicolas Ivanoff in Red Bull Air Race 2007 – 08 era and flown in world aerobatic competition by the German and American teams," Bell said.

"How does Bluebird compare with my pink Extra 300 midwing Plane Baby? For starters, engine is bigger with more horsepower - a Lycoming 580 vs 540. The ailerons and elevator have a modified design with counter-weighted horns that catch the air when deflected, resulting in greater roll rate and pitch onset. This particular SC is lighter than stock due to its Red Bull origins, and it is a single seat vs. two seat. You feel like you're climbing into a race car rather than sitting down in a plane ergonomically. Basically, it's an Extra on crack and feels like a rumbling beast that wants to jump into the sky when the throttle is opened."

After the five competition categories, many enjoyed watching the Hammerhead finale, which was a four-minute freestyle.

The four-minute free has no limit to the number or style of figures and can be flown with smoke and music in order to add points for presentation. The competition is composed of flying for four minutes. Any long or shorter could be subject to penalties that can drop a pilot from first to last. However chaotic it may look to the spectator, it is judged to standards like the rest of the competition.

Bourke, President of IAC itself and a member of the National Team attended and won the Unlimited category, as well as the four-minute Unlimited Free.

The volunteers for the competition deserve a lot of praise. Under the current circumstances, they were able to help make this competition possible.

Jones said due to COVID guidelines, they were unable to announce this year's contest, and hopes by the October contest, things will be better.

"We've got some big plans for that contest, and will be back on the weekend of October 15," Jones said. "We're looking forward to things being more open so that we can invite the community out."