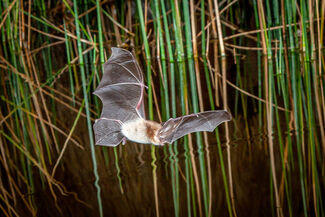 Let's call him the Batman of Borrego.

While Don Endicott is not a caped crusader, he is a self-taught naturalist who is fiercely dedicated to studying and protecting nature and wildlife.

You could also call him the bighorn census taker, or the archeology advocate, the bird watcher and perhaps a few other things, but for now, let's stick with Batman. He devotes countless volunteer hours to all of these activities.

For the past year, Endicott has been studying the bats of Borrego Palm Canyon to determine how they were impacted by the wildfire that tore through the grove in January last year.

The visible damage of the fire was the most obvious result, but it is also the unseen animals who call the palm groves home that may have been severely impacted.

Bats are just one of those species, but particularly fascinating to Endicott.

To find out how the devastating fire affected the bat population, Endicott submitted a research application and was approved by State Parks to begin his year-long study to determine the status of bats in general and one species in particular.

While the public can only view the grove from a distance currently, Endicott is allowed to enter to conduct his study.

"My goal was to establish a population baseline initially after the fire and then see how their population returns as the palms recover from the fire," he said.

His focus has been on the western yellow bat, because that species in particular roosts in palms and would have been most impacted by the fire.

For the past year he has made weekly three-miles trips into the first grove of Palm Canyon to change batteries and retrieve data collected by a Wildlife Acoustics Song Meter Mini bat detector.

This is a small, acoustic monitoring device that records the sounds bats make while hunting at night.

Like humans, bat voices are different, and Endicott is able to identify the species by the frequency of the sounds they make. Humans generally can't hear these high frequency sounds, but the device deployed by Endicott does.

In addition to the western yellow bat, he has recorded a dozen different species. The most common has been the canyon bat. Western Mastiff and Western red bats were rarely recorded, and the western yellow bat accounted for about six percent of the total bats encountered. Endicott admits to being fascinated by the tiny animals, the only mammal that can actually fly.

Their sonar system is similar to what fighter jets use to detect other aircraft, although far more sophisticated. Endicott likes to call bats "Nature's Tiny Fighter Jets."

"With echo location, bats can detect something as small as a human hair, at night, while flying 60 miles an hour," Endicott said.

Bats also have large ears that help them hear the echo returns of objects in their path. Essentially, they see with their ears.

Bat echolocation also allows them to find insects, which is their primary food source. And the acoustical recording devices will record the more rapid sounds made by bats as they get closer and closer to their prey. This sequence is called search, approach and terminal calls.

Of the 22 bat species found in San Diego County, all are insect, moth and scorpion feeders. In fact, they are voracious eaters, consuming up to 1,200 insects nightly, including those pesky mosquitos.

It was feared that many bats may have died in the grove fire, but that does not seem to be the case. Likely they fled and since the fire was localized, were able to seek shelter in other palm groves nearby.

The good news coming from Endicott's work is that bats seem to be returning to the grove as the palms recover.

"There is plenty of bat activity and part of that is because there are more insects after the fire," Endicott said. "It looks like the damage to the Palm Canyon bat population was limited."

There are also more migrating birds, likely a result of some thick underbrush being cleared by the fire.

Yellow bat numbers also seem to be increasing, along with a westward movement in their population, likely the result of people planting decorative palms, according to Endicott said.

He cautioned people to avoid trimming their palms in the spring and early summer when the newborn pups are being raised.

As the first year of Endicott's project ends, he hopes to continue the study for a few more years.

In the meantime, Endicott does bat talks to groups, and works to overcome the bad reputation they have.

"Most people have never seen a bat in the wild, and only know what they have seen in movies," Endicott said.

That often means the furry little animals are portrayed as blind, blood thirsty, rabid creatures that will get tangled in your hair. None of that is true.

In reality, Endicott said bats are critically important as part of maintaining balance in the natural world.

And they have been doing it a long time. Fossil records from over 50 million years ago have confirmed the presence of bats.

Species found here are all about the size of small birds, but the 1,300 species found throughout the world range in size from a small cat to a bumblebee.

Endicott is a resident of San Diego but is passionate about Anza-Borrego Desert State Park.

"It's sort of like my backyard. I've been hiking for years in the canyon of the park and participating in sheep counts for a long time as well," Endicott said.