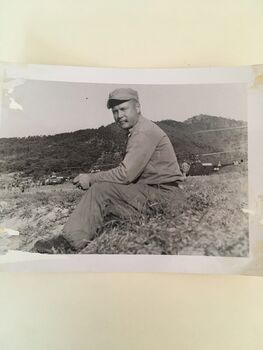 Hal Hawkins, a long-time Borregan, who graced a painting with just a stroke of a brush, a World War II veteran, and a kind-hearted soul, passed away at Palomar Medical Center in Escondido on April 2 at the age of 98.

Hal Hawkins worked on his art for 88 years, first picking up a paintbrush at the age of 10 after a hip/leg displacement put him on crutches at the age of five and pretty much restricted his young physical life and lifestyle. It left Hal with plenty of free time in Kalamazoo, Michigan, time he used to draw, paint, and sculpt. "I was always thinking of art," he said two years ago. He was declared "cured" of his affliction at the age of 13, but the physical aftermath was with him to the end.

During World War II, Hal joined the Navy, began U.S. Navy flight training in 1942, and graduated from Naval Air Cadets in 1943 as a 2nd Lieutenant in the Marine Corps 1943. During WWII, he participated in the "island hopping" campaign against the Japanese, flying multi-engine transport aircraft. He once recalled flying R5C's (Curtis Commando – C-46) with Tyrone Power in the Pacific.

Post-war, he was stationed in Tsing-Tao, China during the Nationalist-Communist War during the U.S. China Occupation (from 1946 to 1948), flying R5C's After a forced landing in Chinese Communist-held territory, he and his crew were held prisoner until their release was negotiated several months later. Hal had said with a very wide grin that it was "rumored to include an unknown quantity of gold bullion."

After his marriage in June to his first wife, Hal re-entered the Marine Corps in July, 1946.

In 1951, he transitioned to flying helicopters and, with the First Marine Division, flew the first troops into battle using "Vertical Envelopment" in the Korean War, where he was awarded the Distinguished Flying Cross (DFC) for evacuating wounded troops under extremely adverse conditions.

During the 1950's, he flew helicopters in support of nuclear weapons tests in Nevada and at Bikini Atoll, in the Marshall Islands. In Nevada, after detonation of the weapon, he flew Marine troops into the blast site. At Bikini, Hal flew the technicians in to the test site to arm the weapons, then flew back over the test site after detonation for observation purposes.

His military career, which lasted 21 years, required numerous relocations to suit military requirements. He retired from the Marine Corps in 1963, in Orange County, California.

After his military service, he flew light helicopters for the Hughes Tool Company. He worked initially as Midwest regional sales manager, based in Minneapolis for HTC from '63-'65, selling the 269-A and 300 light helicopters; his region included 5 states and TWO Canadian provinces. Later, as Chief Demonstration Pilot, he flew demonstrations of the Hughes 500/OH-6A across the U.S., and later, in the 1967 Paris Air Show and other European countries.

Later, he worked as a production test pilot for HTC out of Palomar Airport in Southern California, testing the LOH/OH-6A helicopter. Many, if not all of the aircraft being tested had crashed in Vietnam, and were returned to the HTC factory to be re-furbished. In 1969, he was flight-testing one of these aircraft when he experienced a mechanical failure of the flight controls of the main rotor head. He controlled the aircraft sufficiently to bring the helicopter back over land, and attempted an emergency landing (auto-rotation). He and his crewman crash-landed in a commercial flower field near the I-5 freeway. The injuries Hal suffered were career-ending for him, at age 46.

In the 1970's, he worked as a Real Estate Agent and Broker and began his art career producing numerous oil paintings.

Also, in the 1980's, he completed a course in Aviation Safety (accident investigations) at the University of Southern California, and he worked as an Aviation Safety Consultant for a few years, building on his experience in aviation safety from the Marine Corps.

After WWII ended, he left the Marine Corps, and attended college at Western Michigan University in Kalamazoo, Michigan, for about one-half year.

Hal lived in Warner Springs and Julian, before moving to Borrego Springs, where he lived for about 30 years. He and his first wife were married until 1989, and they had four children. In 1997, Hal married Patricia Erin Swope, who went by Erin, in Borrego Springs.

Hal celebrated his 98th birthday at The Propeller Restaurant in January, where he was commissioned by owner Patrick Meehan to showcase and appreciate both his artistic work and his flying experiences.

When you first visit The Propeller, soon to open for business down at the airport, take a few moments to appreciate the paintings by Hal Hawkins gracing its walls. There are about 100 of them, so take your time. His personal history of aviation is rendered on canvas, and every one of them tells a story.

On another wall, is an oil-based mural of images showing Hawkins' C-46 transport that he flew in which was used to clear a mountain top fortress of enemy soldiers, and the raising of a flag. This oil painting commemorated the 75th anniversary of U.S. Marines raising the Iwo Jima flag atop Mt. Suribachi. Hal Hawkins was there to witness what later came to be one of the most famous and iconic images of World War II. It also includes airplanes of the era and his friend and pilot John Glenn, a former astronaut and U.S. Senator who Hawkins reported to be somewhere in the local theater of operations, probably at sea aboard a carrier during Hawkins' Iwo Jima mission.

Even at his advanced age, Hal still had plans last year for another piece of his artwork along a blank wall adjacent to his nearly completed mural. With a gleam in his eye and pointing his paintbrush for emphasis, Hal commented, "I have some ideas for that wall."

May we all raise a glass to his talent and memory.

Hal is survived by his four children, Brian, Robert Phillip and Patti. He is preceded in death by his wife and Patricia Erin Swope Hawkins.

A memorial for Hal is scheduled for July at MCAS Miramar National Cemetery.