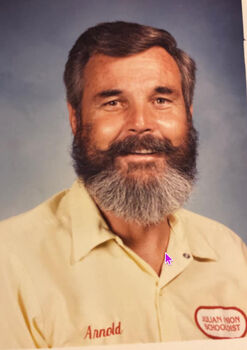 Orville Arnold Gray died peacefully in his home on March 13, 2021 in Fallbrook, California at the age of 84.

Arnold is survived by his wife, Margarita, four sons; Doug, Steve, Kenny, Tony, and his daughter, Tina. As well as nine grandchildren and one great granddaughter. He is preceded in death by his mother, father, and brother Max.

Arnold was born on November 25, 1936 in Orcas Island, Washington to Britta L. Gray and Frank E. Gray. Arnold met Margarita while working together at the Julian school, they have been married since 1996.

He served in the United States Navy for four years on the USS Lenawee. Arnold retired as a brick layer after 26 years. He owned antique shops in Pacific Beach in the 70's. He lived in Shelter Valley for more than 20 years, and worked for Julian Unified School District as a school bus driver for almost 10 years.

During the 19 years he lived in Ranchita, Arnold worked in Borrego Springs for the school district in transportation, and also worked for the Anza-Borrego Desert State Park maintaining the native bird's habitat.

Arnold's family will be holding a private ceremony in his honor. Condolences can be offered with donations to Alzheimer/Dementia research.