The Revenge Of Vinyl 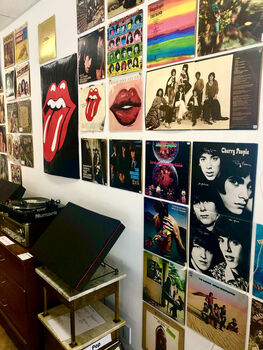 In the age of Spotify, iTunes and online streaming music platforms, it is interesting to know that vinyl LP sales have been steadily rising.

If you consider yourself a true music lover and have a record player or are curious about starting a collection of vintage vinyl records, you'll enjoy a visit to, "The Revenge Of Vinyl," show at The House of Borrego Springs East Gallery, featuring the merge of two extensive, privately owned, vinyl collections. The show offers a wide range of vinyl collecting opportunities including rare and unique records with prices starting at just under $20.

In 1990, compact disc's took over and vinyl fell by the wayside. However, vinyl records began to increase in popularity several years ago their return echoed in the name of the this show, "The Revenge Of Vinyl."

There is a new generation of millennial audiophile collectors on board collecting vinyl as well as seasoned music lovers.

At auction, vinyl has soared with the hammer closing on $290,000 for The Beatles, Sgt. Pepper's Lonely Hearts Club Band, signed by all four Beatles. Elvis Presley's first ever recording, Happiness, closed at $300,000. A couple of examples amongst escalating results for vintage vinyl record sales. Check out your old LP's, you may have some treasures, especially if they are signed.

Vinyl records provide a deeper, tactile connection to music. Musician's talk about the warmth of the sound. Then there is the musical ritual, even a romance to the process of selecting and playing a record. Pulling the record out of the sleeve and popping it on the turntable.

Many people believe the sampling rate used to capture sound on a CD may be digitally perfect, but it may not be all the sound that's available to capture. That's part of the reason why CD's are often described as cold, whereas records feel warmer and rich to many listeners. Then there is the obvious fun of collecting in itself. In some cases, vinyl is the only option to hear what those record's sounded like before they were digitally remastered. Additionally, some vintage rare recordings have never been adapted for newer formats.

From an artistic point of view, unusual album cover art is also apart of the experience of collecting vinyl records. Rolling Stone's, Sticky Fingers, cover art which featured a zipper you could open was created by legendary Pop Art artist, Andy Warhol, who also created the cover for, The Velvet Underground & Nico. The cover came with instructions to peel the yellow banana graphic, and after peeling a top paper away, a cheeky flesh colored banana appeared.

Early copies of the record became rare collector items because the record only featured Warhol's signature and did not mention the band's name, which was only added to later pressings. Acclaimed New York Artist, Robert Rauschenberg, designed a clear plastic cover for the iconographical Talking Heads, Speaking in Tongues, album.

The Beatles 1966, Revolver, cover illustrated by their friend Krause Voorman and photography by Robert Whitaker set a trend for LP covers, and visually ushered in the psychedelic era.

Hipgnosis, design gods, Storm Thorgerson and Aubrey Powell collaborated on every album cover ever of Pink Floyd. Recognized as the best cover artist's of all time, Hipgnosis created for Led Zepplin, The Who, Genesis, Black Sabbath, UFO, AC/DC, Scorpions, and many more.