Listen to the Moon 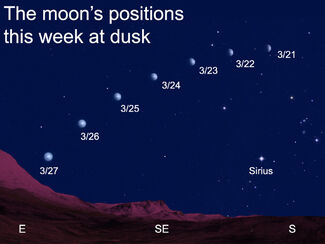 The moon is patient, reliable, soft and friendly, and it's in these qualities we find her great strength.

There's an old joke that I just love to tell.

An elementary school teacher was presenting a lesson about the moon and asked the children which is more important, the sun or the moon, figuring the answer was obvious. After all, the sun's energy makes possible all life on Earth, while the moon is merely a hunk of rock that just reflects sunlight.

One young child nearly jumped out of his seat with excitement. "It's the moon," he proclaimed.

Of course, this response puzzled the teacher, who immediately asked why he thought this. The young man was happy to oblige.

This little guy may be on to something! After all, sky watchers have long recognized the importance of the moon; in ancient days, they knew it as a great celestial goddess and gave it names such as Diana, Aphrodite and Levanah.

Why many cultures perceived the moon to have female traits is anyone's guess. Perhaps it was her 28-day cycle, during which she dances among the stars, intriguing us with her ever-changing shape and brilliance.

Or maybe it's all just whimsical thinking.

Some believe the moon pales in comparison to the sun. After all, the sun is pure power. It's bold, strong and, at times, completely overbearing. It doesn't just exist; it demands our attention.

The moon, by comparison, is subtle. She's patient, reliable, soft and friendly, and it's in these qualities we find her great strength.

It's easy for a beginning moon gazer to think her behavior and movements capricious, but get to know her well and you'll find that she's not at all erratic but carries herself with amazing poise and dignity.

By day, she graciously fades and allows the sun to light our world. But after dark, she looks down upon the land and invites our glances in a most alluring way.

When full, as she will be on March 28, her soft radiance can illuminate even the darkest of nights and outshine the most brilliant of stars. Two weeks later, when she's but a delicate crescent peering through the sun's glare, she displays a remarkably dazzling elegance. And through it all, she shares every bit of herself and asks nothing in return.

And just when we think she can be overwhelmed by the sun's immense power, she slips silently in front of its rays to create the most stunning sight in all the heavens: a total Solar eclipse.

Anyone who merely sees our moon but doesn't "listen" will miss her great wisdom. Pay close attention, for in her movements, she will teach you of the cyclic nature of life, of the ebb and flow of all things, and how to embrace all with the style and grace she displays on her celestial journey.

You know, come to think of it, maybe this idea of our moon having female traits isn't all that far-fetched after all. And perhaps this is a great week to get outdoors to begin "listening" to the moon.