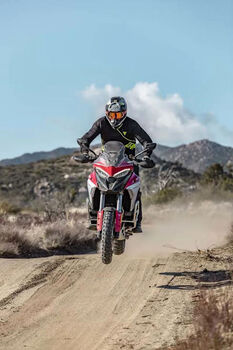 One of the most anticipated motorcycles of the 2021 model year was launched in Borrego Springs, the Ducati Multistrada V4 S. The Multistrada V4 continues Ducati's core principle

for the Multistrada lineup – of having a model that is four motorcycles in one. With 168 hp and a V4 engine, a group of journalists were invited to Borrego to ride the bike in the Anza-Borrego Desert State Park.

The ride involved equal parts of curvy mountain roads and sandy desert tracks giving them a good idea of what the Multistrada V4 S was capable of on the street and in the dirt. This bike will represent 20% of Ducati's worldwide sales, so it's important that it was to the journalists liking.

It was a great success with all the riders with one saying, "If there was only one motorcycle we could buy with our hard earned dollars, this would be it."

In the evenings, all were entertained at Tom Hildenbrandt's Kesling's, wining and dining on their outside patio under the stars.