A Beloved Father and Husband of Incredible Faith and Resiliency 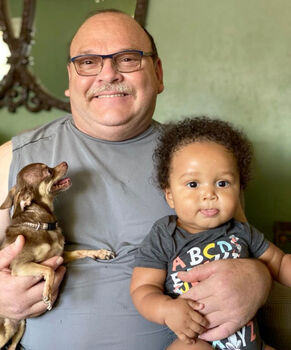 "Dios sabe lo que hace" ("God knows what he does") is the song Hector and his wife of 34 years, Irene Meza, loved to sing together. It was just this song they shared a few days before he passed away from post-COVID 19 complications on January 23, 2021. According to Irene, he had accepted his inevitable passing and even called his family, all 10 siblings, as well as his four children and wife, to ask for forgiveness for the things he did and did not do for them. Hector was at peace and so certain of the Resurrection, he knew he would see them all in the afterlife.

Hector was born on February 27, 1965, in Mexicali, Mexico, to Maria and Jose Guadalupe Meza. His father worked in construction and he taught all of his 11 children how to build a house from the ground up. At the age of 17, he left for Santa Monica, California, to work with his older brother in construction. He returned to Mexicali to graduate from high school and then attended accounting school in Mexicali. When family funds ran out for him to continue schooling, he joined his dad in construction.

Along the way, he learned the additional trades of butchering, waitering, bartending, cooking and eventually plumbing from Borrego Springs plumber Paul Laymon. Irene shares that Hector owed so much to Laymon for the mentoring he provided him. Also, along the way, he met his wife, Irene, in Mexicali and they eventually moved to Borrego Springs where Irene's sister, Tina Garcia Cook, owned La Siesta restaurant (now Pablitos). Hector worked as a cook.

Irene shares that when she met Hector he was in incredible physical condition, playing all sports from basketball to soccer and tennis. He ran 10 miles every other day and ran marathons. She shares that he was amazingly energetic, constantly working or working out. This energy came through in his charismatic personality, his huge smile for everyone and his ability to socialize with ease and humor with everyone.

When neck surgery, a debilitating car accident and a dozen surgeries left Hector unable to work in construction or plumbing, he did not give up nor did he lose faith in his Lord. His favorite line was "God will provide" and this faith kept him going when most mortals would have hung it up. He truly believed that there were angels on earth taking care of all of us. He continued to do small, handyman jobs while providing for his beloved family. Rumor has it that there wasn't anything that Hector couldn't fix!

His daughter, Carolina, shares that even though her father was in chronic pain, he never showed it nor let it interfere with his interactions with his children. He rode bicycles with his children, he played with them and more than anything else he loved to dance. He would be the first one on the dance floor at a Quinceañera, enjoying the moment and hiding his pain. Héctor was truly a hero to his children and he modeled for them the resilient behavior they have all come to understand and respect.

Hector is survived by his wife, Irene, four children, two grandchildren and 10 siblings. Hector encouraged his children to pursue their dreams and he was most proud of their accomplishments: Hector Meza works as a paramedic in Imperial Valley; Iris Rucibwa is a nurse in Riverside; Adrian Meza works in sales in Imperial Valley; Carolina Meza is an academic advisor at Cal State San Bernardino.

No doubt, Hector was at ease with his life and his passing. His life's lessons of Love God; Love Ourselves; Love Others have passed on to his children and now he can rest in peace.

Assistance to the family for expenses can be donated at https://gofund.me/9cd49b87