The Julian Town Square – One Step Closer to Reality 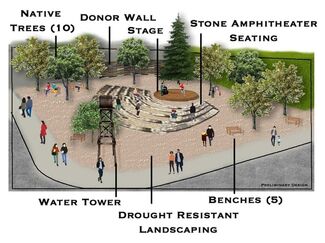 For over three years, a local group has been working to beautify the empty lot in the center of Julian. The Julian Community Heritage Foundation (JCHF), a recently registered nonprofit organization, seeks to transform the space into the Julian Town Square. Plans for the space include Drought resistant landscaping, seating areas, native plants and a stage or amphitheater.

Through the support of former Supervisor Dianne Jacob, JCHF was awarded funds through the Neighborhood Reinvest Program. JCHF also received funding through the Park Land Dedication Ordinance from the County of San Diego Parks and Recreation. With these two large funding sources and numerous donations, the JCHF has obtained the amount needed to purchase the lot. The group is currently in the final negotiations with the property owner for the purchase.

The lot, which was previously home to a Chevron gas station, holds a remarkable history. It was once the location of a community store and a Sheriff's station however several leaks from the Chevron holding tanks polluted the site and rendered it unusable. For nearly 30 years, the lot at the corner of Washington and Main Streets has sat undeveloped and served only as an empty, fenced in space at the center of town. As of 2018, the lot was classified as a brownfield and cleared for development by the San Diego County.

JCHF has sought to transform the lot into a centerpiece for the community of Julian. The group, made up of community volunteers, has envisioned a place for the community to hold seasonal events, for artisans and musicians to showcase their talents, performances and more. With the help of many donors, JCHF is looking forward to the reward of their efforts over the years. Purchasing the lot is the first step in bringing the Julian Town Square to life. Once purchased, JCHF plans to step up their fundraising campaign to begin the development phase of the project. Many community members have already offered their assistance to support the project by donating their time and skills to making the community space a reality. More help is definitely needed though.

The Julian Community Heritage Foundation has set up several donation tiers that will allow donors to leave their mark on the Julian Town Square for generations to come. A donor wall will prominently display names of those who have supported the project. Donors also have the option of having their name on a bench, tree plaque or even the functioning water tower which will irrigate the landscape.

To learn more about the project, to donate and the donation levels, visit juliantownsquare.com.