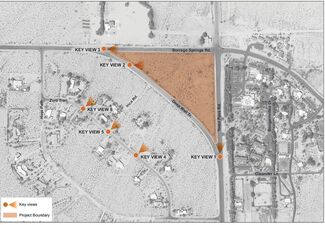 At its January 7, 2021 monthly meeting, the Borrego Springs Community Sponsor Group unanimously recommended that the La Casa del Zorro Solar Project proceed to obtain an administrative permit from County Planning and Development Services. The project would install an array of 2,322 395-Watt Solar panels on single axis trackers to generate 750 kW of electricity for use by the resort and to offset a portion of their current monthly electricity bill. The system will be sited on the triangular lot bounded by Yaqui Pass Road, Borrego Springs Road and Deep Well Trail, across from La Casa. La Casa had acquired this property in 2018 for this purpose.

The project would occupy 4.5 acres of the 6.5-acre parcel, with 50-foot setbacks, fully fenced with a chain link fence and PVC slats of a beige color to match with the surrounding desert landscape. 3D visualizations of the project from various locations were presented for the consideration of the Sponsor Group and attending local residents.

Jack McGrory, Owner-Partner of La Casa del Zorro, and John Wells, Manager, were present at the meeting to describe the project and answer questions.

The Sponsor Group had previously in January and June of last year, requested La Casa to consider alternate siting of the project. In the meeting, John Wells provided reasons why the current location is the only feasible location. The existing structures in the resort are old and the roofs will not support a Solar retrofit.

Other pieces of vacant land on the property are being saved for potential expansion with up to 19 additional casitas in the future, but those plans will not happen until the resort turns cash-flow positive. Jack McGrory insisted that La Casa is a labor of love for him even as he and his partners have pumped over $10 million dollars into the property and have yet to return a cash distribution to the partners.

Technical concerns with respect to road safety due to the location next to three roadways, and drainage and flood plain issues have been raised by the Sponsor Group previously. County Planning and Development Services will evaluate the design for these issues prior to granting administrative permit.

Community members and Sponsor Group members were concerned about the aesthetics, as the proposed Solar field lies at the southern entrance to Borrego Springs via Yaqui Pass Road or Borrego Springs Road, for visitors approaching via Route 78, either from San Diego and Julian, or from the east. The community would not want an eyesore at the entrance to Borrego Springs. McGrory and Wells responded that their plan is to market La Casa as a high-end eco-resort and as the project is at their own doorstep, it is in the interest of La Casa to make sure that it will be visually pleasing for their guests. Sponsor Group members expressed the view that subject to our harsh conditions of heat, blowing sand and winds, PVC slats are likely to deteriorate rapidly and may require frequent replacement.

Residents attending the meeting spoke in support of La Casa proceeding with the project. La Casa is an anchor property in Borrego Springs with up to 80 jobs at peak employment and its success is important to the community.

Sponsor Group member, Clint Brandin, a resident of Deep Well and President of the Chamber of Commerce, spoke about the past troubles at La Casa when the property was not being maintained. Brandin said, "When the entire property was going to seed, that was a much greater eyesore than a Solar field on the triangular island."

With respect to mitigation for the loss of desert vegetation on this parcel, Rebecca Falk, Sponsor Group Chair, requested that any property purchased to satisfy biological mitigation requirements be in a similar location, such as on a major roadway.

The Sponsor Group received a presentation from David Garmon, President of the Tubb Canyon Conservancy and local resident and expert hydrologist John Peterson on the proposed Regional Conveyance System (RCS) project being pursued by the San Diego Country Water Authority (SDCWA). This topic has been well covered in the Borrego Sun in recent issues in September and December by David Garmon, most recently in the informative article "Desert Pipe Dream." We expect this topic to continue to recur over the next few years, so it is important for Borregans to familiarize themselves with the issue. David offered the following summary for the consideration of the Sponsor Group and the Borrego Springs community.

1. The SDCWA is dependent on Los Angeles Metropolitan Water District (MWD) infrastructure to transport Colorado river water to San Diego. The MWD therefore has a chokehold on the SDCWA.

2. MWD subsidizes a significant portion of their operations through payments from SDCWA. Borrego Spring could be a pawn in this long-running power struggle between these two regional water authorities.

3. It is possible that the SDWCA does not really want to build out the RCS but is just using the project development work as a bargaining chip with MWD. Nevertheless, the SDWCA Board voted to proceed to spend $1.3 million on the next phase of the project design.

Garmon offered the following arguments for why the RCS is wrong for Borrego Springs.

2. A large industrial construction site in the center of Borrego Springs for 15 years and an industrial site in perpetuity, thereafter, is incompatible with the eco-tourism vision.

And why the RCS is wrong for San Diego residents.

1. The RCS just redirects the same water that San Diego currently receives via MTD. San Diego gets no new water at a total cost of $5-6B. In fact, due to lower quality of the water at the All-American Canal, San Diego would get 20,000 acre-feet less water due to additional losses from the reverse osmosis process.

2. The route through Borrego Springs including three pumping stations will consume 40% greater energy than the current water transportation through MWD infrastructure, at a time when the county, the state and the nation are trying to reduce their energy footprint. This is in addition to the energy used in the 15 years for construction of the project.

The Sponsor Group consists of seven members with Rebecca Falk as chair. Linda Haddock, a member for the last four years has resigned. There was a proposal a few months ago to expand the number of seats by two, for which Chair Falk had received a verbal OK from San Diego County District 5 Supervisor Jim Desmond's staff. Six people applied for the two proposed new seats and after interviews, two candidates were selected: John Peterson and Julie Gerson. Nevertheless, Supervisor Desmond has now recommended that the size of the Sponsor Group be kept at seven and not expanded. The Sponsor Group will now select one new member to occupy the seat vacated by Linda Haddock.

The next regular meeting of the Sponsor Group will be held February 4, 4:30 p.m. via teleconferencing. The Sponsor Group appreciates participation of all residents and stakeholders. For further information and to be added to the Sponsor Group email list to receive agendas and agenda packets, contact the Chair at rebfalk7@gmail.com. Address U.S. mail to: Community Sponsor Group, P.O. Box 1371, Borrego Springs, CA 92004-1371, or visit: https://www.sandiegocounty.gov/content/sdc/pds/gpupdate/comm/borrego.html