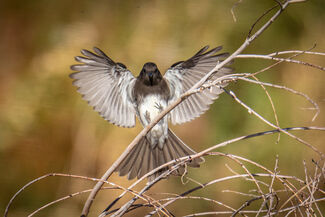 The annual Audubon Christmas Bird Count in Borrego Springs was certainly an event where birds of a feather did not flock together.

In this case, the "birds" were the dozens of count volunteers who typically team up to annually record wild bird species in a 15-mile circle around Borrego Springs.

This year's event was conducted on Dec. 20 with over 111 species tentatively identified in 20 count areas. The unconfirmed total includes 11,320 birds, the highest tally since 2013.

For a time, it was feared that the count might not happen, due to concerns over COVID-19.

But you can't keep bird lovers down, and with a few simple adjustments, the count was able to go on, and for good reason.

The annual Christmas Bird Count is a nationwide event that began 121 years ago when 27 birders headed out on Christmas Day after their holiday meal.

Today, more than 80,000 counters at nearly 3,000 locations are included during the count period that extends from mid-December through early January. Six counts are conducted in the San Diego region.

This is important information gathered by citizen scientists and is used to gauge the health of bird populations, migratory trends, habitat conditions and other factors critical to preservation of wild bird populations and wildlife conservation efforts. This was the 36th year of the count in Borrego Springs.

Despite the challenges this year, Theriault called the count a success with 80 counters participating, which was only five less than 2019.

The biggest difference was instead of teams working together in the field, many counters worked alone.

"The count areas were more fractured this year with many people birding alone," Theriault said.

Count totals are still not final because big part of the annual count was a gathering for lunch at the Steele/Burnand UCI Desert Research Center where results could be tabulated. This also provided coordinators and team captains a chance to discuss discrepancies and ensure the count was accurate.

This year, participants e-mailed their totals to team captains who then compiled numbers and forwarded them on to CBC coordinators.

There were some surprises and overall local bird populations appear to be strong and healthy.

The rare sighting of a black-and-white warbler was a first for the Borrego Count.

"It was photographed, so there is no mis-identification here," Theriault said. This migratory warbler was previously known in Borrego only as a rare spring migrant.

Last year there were 114 species observed and more than 9,000 individual birds counted. Theriault said total numbers for this year were still being compiled at press time.

Some of the most frequently observed species this year included 1,389 western bluebirds, 1,361 white-crowned sparrows, and over 1,000 common ravens. White-winged cove, house finches, and California quail were also logged with good numbers.

There were fewer hummingbirds and phainopepla counted this year and it has been suggested that could be the result of our lack of rainfall so far this winter.

What makes the Borrego count circle both challenging and significant is the varied terrain with the 15-mile count circle.

While many birds are counted in places like Roadrunner Club or De Anza Country Club, counters also head out on foot to areas like upper Palm Canyon or via four-wheel drive to Coyote Canyon.

More remote areas require teams to be up well before dawn to reach remote locations such as the San Ysidro Mountains at the eastern fringe of the Los Coyotes Indian Reservation. Other count locations include Borrego Sink, upper desert locations such as Culp Valley, along with local residential areas and agricultural fields.

Counters are not only on the lookout for local resident birds, but seasonal migrants passing through or enjoying the region's mild winter weather.

Final numbers are provided to interested groups and results are posted on the UCI, ABF, and Anza-Borrego Desert State Park web sites.