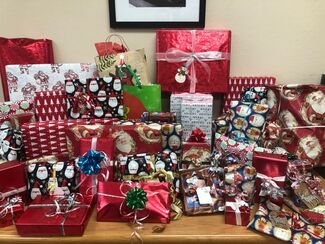 This year has definitely been one for the record books and not just for unprecedented changes and challenges. Once again, the Julian community has proven itself to be filled with kind and philanthropic people all working together to provide help to those in need. Many Julian residents were hit hard by the pandemic and the ability to provide for themselves and their families has been extremely difficult. Each year, Julian Pathways, Inc. increases their fundraising efforts for the holidays and it was understood early on that this year would be especially tough for many.

In the past, Julian Pathways, Inc. concentrated their holiday fundraising programs on Julian Union Elementary School District students and families. However, beginning this year, Pathways extended their services to include the entire Julian community. That, along with the current pandemic, led to a greater number of people in need. In addition to providing winter jackets for children in the community through their Winter Warmth Program, Pathways also distributes new bicycles to JUESD third graders from the Bikes for Kids Foundation, turkeys and food staples for Thanksgiving and Christmas gifts for families in need.

For the second year in a row, Marilyn Faulkner generously donated frozen turkeys. The turkeys, along with many traditional sides purchased by Pathways, were given to 10 families in the community so that they could have a fulfilling Thanksgiving meal.

With the kindness of the Sons of the American Legion and private donors, Pathways' Winter Warmth program was able to distribute over 90 new jackets to Julian children. Ranging from toddler to teenagers, many in the community will be much warmer this winter.

The number of children and families in need definitely increased this year however, so have the donations. Pathways' Resource Coordinator, Carmen Longoria, remarked that this year was clearly record-breaking in the number of children that were helped. Each holiday season, Longoria separates children into lists of who will benefit from the various donations that Pathways receives based upon need. Whether it is one toy from the Toys for Tots drive or a toy and clothing items from a Secret Santa each child receives a little something. In an effort to fulfill children's needs and wants for Christmas while still maintaining the magic of Santa, Pathways' "elves" asked children to provide a wish list. Each child was to list items that would fit into four categories: want, need, wear and read. Longoria and Counselor/Resource Coordinator, Krystin Hunter worked hard to fulfill each wish list item by matching them to donors (aka Secret Santas) or handling the shopping themselves. This year, due to the overwhelming number of donations, every child in need in the Julian community will not only receive a toy but will also receive items that fulfill his or her complete wish list.

The charitable outpouring of compassion for those in need has really touched the hearts of the Julian Pathways, Inc. staff.

Each time someone inquired about making a donation or dropped off jackets or beautifully wrapped Christmas gifts, it made long working hours and dedication to serving the community that much more meaningful. Executive Director, Hilary Ward, would like to especially thank Longoria and Hunter, for their tireless work communicating with families, working with donors, shopping for items, wrapping gifts and distributing them. Without them, the entire holiday season would not have been handled so smoothly. The entire Julian Pathways, Inc. team is beyond grateful for all of the support and charity that they have witnessed and wish each and every one a wonderful holiday season.