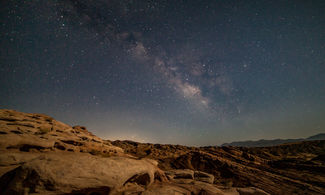 The County of San Diego has taken final action to adopt new lighting standards that will help preserve the dark night skies that attract thousands of visitors to Borrego Springs.

The new Zone C lighting regulations apply to the communities of Borrego Springs and Julian and were the result of an effort that included help from the Borrego Dark Sky Coalition that led a similar effort here in 2008.

"This is a big success for our region! Julian is now able to become a dark sky community, effectively creating a large, official, dark sky region that spans from Julian, the Anza-Borrego Desert State Park, and Borrego Springs," said Betsy Knaak, chairwoman of the local coalition and executive director of Anza-Borrego Desert Natural History Association.

Both Borrego Springs and the surrounding state park have already been designated as dark sky locations.

Knaak and the Borrego coalition were a big help to the Julian group that began four years ago to obtain the Dark Sky designation.

The action by county supervisors on Nov. 18 was a major step needed to complete Julian's application to the International Dark Sky Association to earn the designation.

Sollosy and a group of nearly 50 local astronomers created the Julian Dark Sky Network to help advance the effort. Along the way they picked up support from local merchants, Realtors, Borrego Sponsor Group, business and conservation groups.

The new regulations will allow businesses up to 10 years to convert outdoor lighting and will apply to new construction.

Sollosy said many of the new lighting standards are actually more efficient, esthetic and less expensive than older lighting methods.

Support for the new lighting regulations grew when people learned the benefits.

Sollosy said many of the new regulations are simply better ways of doing things, like using motion lights that do not remain on all the time, or business lighting that goes off after hours.

More efficient, diffused and directed LED lighting can also be used that provide the same level of lighting but have far less impact on the night sky.

"Most people are happy to learn how to be more efficient with lighting to preserve the night sky," Sollosy said.

Both Borrego Springs and Julian enjoy spectacular dark skies that attract thousands, especially during celestial events such as meteor showers, the summer Milky Way, comets or even the passing of the International Space Station.

On nights when there is no moon, summer or winter, visitors will swarm to Borrego Springs to see a view that is not available from the city.

Light pollution has made it nearly impossible to enjoy the wonders of the heavens from urban locations.

"There are lots of people who have never seen a dark sky and have no idea of what it's like. There are some areas of the world where there is essentially no night because of light pollution," Sollosy said.

Light pollution can rob people of seeing the beauty of the night sky but can also negatively impact wildlife by disrupting their sleep cycles.

"We are only an hour away from a major city and that's unusual. This will be a real asset for the people of San Diego," Sollosy said.