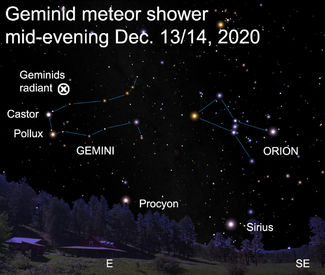 There's no such thing as cold weather, only poor clothing choices.

I was well into adulthood before I ever considered spending an entire night outdoors during December. Once I moved from the U.S. East Coast to a more temperate climate, however, I did this frequently. Why? Because I've since learned two things.

First, there's no such thing as cold weather, only poor clothing choices. When I was young, my parents insisted that, to be warm, I must wear a heavy coat. Not true. The secret is to dress in loose-fitting layers of fabrics that trap in body heat. I now spend many winter nights each year under the stars and northern lights of the Arctic, where nighttime temperatures can plummet to well below zero degrees Fahrenheit – never a problem when I dress properly. To learn more about the subject, do a Google search on a phrase such as "dressing for cold weather" and you'll find many great tips.

My second discovery was also a shocker. I had always believed that the year's best meteor shower was the Perseids of mid-August. Not true. Sure, the Perseids get all the press and create a terrific sky show, but that's because they occur during summer, when people are more inclined to spend nights outdoors. If you also believe this, check out the Geminids of mid-December just once, and I bet you'll change your mind.

During the Perseid shower, sky watchers can often expect to spot 50 or 60 meteors (aka shooting stars and falling stars) per hour – not a bad number in anyone's book. But during a typical Geminids shower, hourly numbers can reach as high as 100 or 120. Most impressive is that the Geminids often produce brilliant fireballs that can light up the heavens, cast a shadow and sometimes even leave a smoky trail behind. You can use binoculars to watch the remains of these trails for several minutes as they twist and turn in upper atmospheric air currents.

The meteors of the Geminids will appear around the sky, but if you were to trace their paths backward, those associated with the shower will all seem to radiate from a point within the constellation Gemini. This "radiant," as it's called, lies just west of the bright star Castor. During mid-December, Northern Hemisphere stargazers will notice Castor and Gemini rising above the east-northeastern horizon during the early evening hours.

This year, the number of Geminids should peak during the predawn hours of Dec. 14, when the Earth slams head-on into the swarm of meteoric particles left behind by the asteroid 3200 Phaethon. Stargazers who don't enjoy viewing at such ungodly hours will be happy to know that you'll probably see some beautiful Geminids before midnight for a few nights before and after the 14th.

To view the shower, I recommend that you dress warmly in layers, get away from bright city lights, lie back on a sleeping bag or lawn chair, and scan the entire heavens with your eyes. And don't forget a thermos of hot chocolate to make the sky show even more pleasant.

If you do these things, I'll bet that you, too, will find that the Geminids are the best meteor shower of the year.