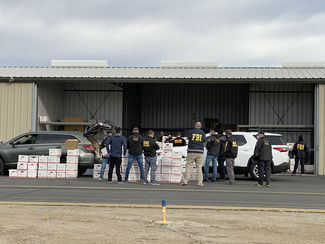 The California Department of Health Care Services (DHCS) confirmed the state has suspended Medi-Cal claims for Borrego Community Health Foundation (BCHF) due to the current Department of Justice/FBI investigation into the Foundation. That sounds important, like something people should know about. However, since BCHF isn't talking about it, the Sun looked into what this means for people with Medi-Cal and the future viability of the foundation's health services.

Dr. Edgar Bulloch, interim CEO of BCHF, confirmed this fact to employees in a letter in November, informing them that the Foundation was appealing the decision to DHCS, asking the state to waive the suspension during the investigation. He added, that the Foundation had funds to keep the employees working and programs operating into the "foreseeable future."

Given that the majority of the foundation's insurance claims come from Medi-Cal, the Sun asked BCHF spokespersons and trustees about the status of the suspension appeal; and what in real time is the "foreseeable future? Certainly, some of BCHF's astute accountants have figured out how long the 20 plus clinic doors can remain open without Medi-Cal reimbursements. Or how long the Foundation's status quo and range of services can be maintained on past grants and Medicare insurance.

Seems like something that should be shared with the public. But as usual, BCHF Trustees aren't sharing details on what is obviously of critical concern to the public they serve, especially for communities, like Borrego Springs, with a 70.3-mile drive to the nearest alternatives for health, dental and pharmacy services.

Silence isn't always golden. Sometimes it's wrong, reckless, and even deadly where mental and physical health is involved.

So what does this mean? And what can be anticipated by the populations in the Foundation's geographic service areas; particularity the most vulnerable patients – the working poor, newly unemployed – due to the pandemic, disabled, immigrants, seniors, pregnant mothers, and children?

Given the Foundation's bloated administrative overhead, inflated with extraordinary high salaries and under the table benefits for officers and administrators, it would seem something will have to give at some point. And at what point does the house of cards built by former CEO's the late Bruce Hebets and Mikia Wallis collapse?

For people dependent on BCHF, this is a crisis in the making, certainly requiring transparency by the Foundation. However, after years of lying to each other, and hiding illegal behavior, it appears to be too much to expect the BCHF Board of Trustees to be forthcoming and honest with its constituency.

Then there's the fact that many of the clinics have been losing money, prior to the investigation. But that didn't stop a $25,000 gift given in 2018, to the Chairman of the Board of Trustees, Dan Anderson, to throw a party for BCHF clinics. Three clinics, by the way, that are leased by his Foundation at $700,000 annually and are losing $6 million annually.

There's a reason, in fact many reasons, the Foundation is under investigation.

Faced with the reality of the end of the Foundation's profiteering schemes, and an overdue examination of how they spent and abused taxpayer's money, it's hard to predict the future. Considering the potential of serious consequences for folks needing government subsidized healthcare; and, who have no alternatives, as is the case with the Borrego Springs clinic, the Sun reached out to critical players for answers.

According to Anthony Cava, spokesperson, office of communications, Department of Health Care Services, "On November 18, 2020, the Department of Health Care Services (DHCS) sent a Notice of Payment Suspension to Borrego Community Health Foundation, temporarily suspending all Medi-Cal payments to Borrego Health, in accordance with California Welfare and Institutions Code section 14107.11. Borrego Health is currently under investigation by the California Department of Justice (DOJ), Division of Medi-Cal Fraud and Elder Abuse (DMFEA).

"DHCS' suspension was effective immediately. Section 14107.11 determines whether providers will be reimbursed for Medi-Cal services rendered during the suspension and when a suspension will end. Borrego Health is appealing the payment suspension."

"DHCS is working with multiple program partners and stakeholders to ensure access to care, and is focused on protecting the health and well-being of Medi-Cal patients and all other patients who access health services from Borrego Health. Though payment for services has been suspended, Medi-Cal coverage continues."

Scott Kodish, speaking for the federal Health Resources and Services Administration (HRSA) offered a lesson in how federally qualified health centers are monitored.

"All Health Center Program awardees are required to conduct independent, annual audits, following national audit standards, and participate in HRSA's periodic Operational Site Visits (OSVs). Annual audits examine policies and procedures for compliance with legislative mandates and their use of federal funds. These audits are available in the Federal Audit Clearinghouse at https://harvester.census.gov/facweb/."

Sadly for Borrego Springs and other clinics in the BCHF network, federal audits and Operational Site Visits managed to miss fraudulent activities, flashing like red lights on the Foundation's IRS-990's tax reports.

When pushed to explain how this applies to Borrego Springs and the BCHF investigation, Kodish, replied, "HRSA's primary goal is to do all we can to help people in need of high-quality primary care receive it. And in this situation, we will do just that. Borrego continues to see patients. If that situation should change, HRSA will work with other health center grantees to provide continuity of care, and if necessary, hold a Service Area Competition for the areas that Borrego serves."

The most disappointing response came from the Foundation: When the Sun asked BCHF Trustees how the suspension would impact people with Medi-Cal insurance, as well as the future of the Foundation's programs and services, the response was neither helpful or honest.

Also requesting answers about the appeal, the Sun, urged the Trustees for transparency and keeping the public in the loop. Curious about plans in case of emergency funding deficits and future priorities if some clinics or services have to be discontinued, the Sun asked about the Borrego Springs clinic. Certainly, Borrego Springs, unique in that the clinic is located miles from health care alternatives, deserves priority consideration.

The response, which didn't come from the Trustees, but from BCHF's crisis publicist, Dan Kramer, led to more questions than answers.

Kramer's reply on behalf of BCHF was: "The Borrego Springs Clinic, Pharmacy, and all other Borrego Health facilities remain open to see patients. The Borrego Community Health Foundation continues to fully cooperate with government inquiries. Our primary concern is the welfare of our patients, and we are committed to doing whatever we can to make sure that our patients can continue to access the services they need."

OK, everything is open now, but for how long without income from the state? What is the Foundation's financial situation, and can they keep all clinics operating, and employees on the payroll, if they have lost state reimbursements? What about future federal HRSA grants and continuance of Medicare insurance claims?

If the BCHF's primary concern is for patients, why aren't the Trustees and CEO telling them about the suspension, rather than asking employees to engage patients in a letter writing campaign to the state in support of the Foundation?

The major crimes under investigation were not committed by the employees, but by BCHF officials and contractors. Lack of adequate credentialing of medical personnel, use of non-certified employees (while charging the governments for the more costly credentialed personnel), and lax oversight by the officers and managers has led to serious patient issues. Note: One of the investigations appears to be related to elder abuse, and BCHF operates assisted living homes in Borrego. Coincidence? Maybe not.

Officials of agencies involved in the investigation wouldn't comment on questions of elder abuse, or the scope and progress of the investigation. However, warrants were executed at the residences of Wallis, and Daryl and Nicolas Priest, owner, and CEO of Premier Healthcare Management, central to the dental fraud investigation. The dental abuses are the most obvious hanging fruit, but there are plenty other profiteering schemes to keep the FBI busy for quite a while. One example, is the Foundation's practice of leasing buildings from friends at prices three and four times the standard rate. The longer the investigation, the greater the stress on the Foundation's budget.

In the communication to interim CEO Bulloch, and BCHF Trustees, the Sun, also, inquired, whether Wallis and Dr. Alfredo Ratniewski, the former medical officer, who along with Wallis, were partners and beneficiaries of Bruce Hebets' profiteering schemes, were still on the payroll. No response was given to these inquiries.

It's easy to forget that BCHF is a trust, a charitable non-profit funded by taxpayers through state and federal government programs. Charged with a contract to provide health services to underserved populations, as a federal FQHC-non-profit charity, BCHF is governed, not owned, by a board of trustees. Trustees hire the CEO to run the day-to-day operations in accordance with board policy, and federal and state regulations.

The former CEO, Mikia Wallis, was recently fired and replaced with another BCHF employee, Dr. Edgar Bulloch. Dr. Bulloch oversees an inordinate number of officers hired to implement the mission from chief financial officer to chief medical officer. Many lack the experience or integrity to be in such exalted positions.

Dan Anderson, chairman of the Board of Trustees, wields the most power in the structure. But he's no longer speaking with the press. He has turned this responsibility over to a crisis communications manager. The Board of Trustees, who have never responded to inquiries, consist of volunteers from Borrego Springs and Riverside County, where BCHF operates a majority of its facilities. Assuming by their silence, many still appear to believe, despite the expanding scope of the investigation, that it's not a big deal, just a few dirty dentists.

Unfortunately, for people who rely on the Foundation's services, the state's suspension of Medi-Cal, along with increased FBI actions, imply just the opposite.

For over seven months, the Sun has charged the Trustees with abdicating this responsibility, and urged them to step up; take their power; fire the people involved in wrong doing; clean house and come clean with the public. The few, who did begin asking questions as a result of the Sun's investigations, were immediately pushed out and ridiculed, and others removed.

When the FBI comes knocking at your door, it's not a minor inconvenience; it's a wakeup call, it's not normal, or business as usual. It means trouble for the Trustees. Worse yet, it will ultimately, impact patients and employees.

The best protection for their patients is to own up to the fact that Medi-Cal has been suspended, and about the appeal. How will BCHF make sure Medi-Cal patients continue to access services, if the state denies the appeal? How long can the Foundation afford to keep open the entire network of 20 plus clinics, pharmacies and dental services? What are their contingency plans?

Fortunately for Borrego Springs, a group of like-minded individuals, including Dr. Carrolee Barlow, are preparing to step in to keep the local clinic operating if needed. The group, which consists of part time, and local residents, many with nationally recognized medical credentials. They're moving forward with other concerned, local individuals and organizations, and recruiting community participation, not just to save, but eventually to build a clinic that meets the needs of all Borregans – both private and government insured.

The investigation of BCHF may prove an opportunity to do just that. This may be the chance to achieve what everyone in Borrego has wanted the Foundation to provide for years – a full range of quality health services. BCHF, not only failed to provide quality services in Borrego Springs, but has consistently drained the clinic of resources.

The group, as previously reported by the Sun, had approached the Foundation with a proposal, hoping to work with them. Unfortunately, they were brushed off after only one meeting. If the BCHF Trustees, representing Borrego Springs on the board, really cared about the community, they would be urging, and helping to bring about an interim coalition to protect the clinic's patients.

More to come about future possibilities for healthcare in Borrego.