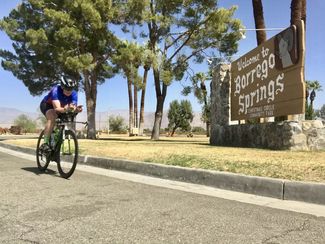 Jen Orr, 43, a physical therapist from Murrieta, California, will attempt to break the World Ultra Cycling Association (WUCA) 24-hour Solo Female World Record of 439.65 miles. The current record is held by Nancy Raposo, which was set almost three decades ago on September 22, 1992.

A newcomer to the ultra-cycling community, Orr entered her first 24-hour time trial in November 2017. Her results: an impressive 392.8 miles and an entry card for SOLO RAAM.

In 2019, she not only won the overall female division of the 928-mile, non-stop Race Across the West, she also beat the entire men's field. An extraordinary accomplishment. In just two short years, Orr had developed into an elite ultra racer.

Orr was originally scheduled to ride in the Race Across America (RAAM), a non-stop, 3,000-mile race, but when RAAM was canceled due to COVID-19, she redirected her training to compete in the 24-Hour WTTC. When WTTC was later also canceled, undeterred, she then set her sights on breaking the WUCA Solo Female 24-Hour World Record.

Her attempt will take place on a 10-mile (on-road) loop in Borrego Springs, California, and will start at 9 a.m. (PST) on Nov. 7. A limited number of spectators are permitted and welcomed, provided they follow local public health guidelines. Supporting and officiating Orr's attempt will be a crew of nearly 20 people, including representatives from the WUCA necessary to certify her results.

"The last three years have been amazing. I have never felt stronger, more determined, and better prepared for such an extreme challenge. I look forward to emptying everything I have on the course and seeing where I end up," Orr said.