The Winter Stars are Coming 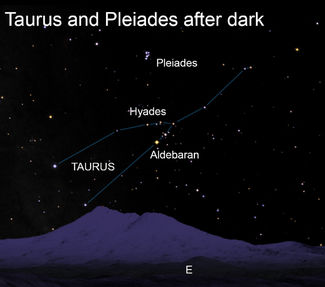 In Greek mythology, the stars of Pleiades represented the half sisters of the Hyades.

Whenever I spot the constellation Taurus, the bull, rising in the east after dark, I know that winter can't be far behind.

Stargazers with vivid imaginations might be able to trace the stars of Taurus into the outline of a bull's head and long horns, with the bright star Aldebaran marking its fiery red eye.

Aldebaran, along with the bright stars Antares, Regulus and Fomalhaut, was one of the four "royal stars" of ancient Persia. Surrounding Aldebaran, we can easily notice a V-shaped grouping of stars known to astronomers as the Hyades.

In the lore of the ancients – from Greece to China – the Hyades has been associated with wet and stormy weather; the name is said to come from an archaic Greek word meaning "to rain."

Only about 150 light-years away, the Hyades forms the nearest open star cluster to Earth and may be only about 625 million years old. Though it appears that Aldebaran is part of this cluster, this star lies less than half that distance from us.

Riding on the back of Taurus appears a tiny grouping of stars that many people misidentify as the Little Dipper; in reality, it's a cluster known as the Seven Sisters, so named because, on a clear dark night, stargazers with excellent vision can see seven stars within it – though most can see only six.

Astronomers know it as the Pleiades; the name is believed to derive from the Greek word meaning "to sail," because when ancient stargazers saw the Pleiades rise just before the sun, it was a sign of the opening of the navigational season in the Mediterranean world.

In Greek mythology, the stars represented the half sisters of the Hyades who were saved by Zeus from Orion's pursuit by transforming them into a group of celestial doves. Aratus gave us their stars' names in a poem from the third century B.C.:

"These the seven names they bear: / Alcyone and Merope, Celaeno, / Taygeta, and Sterope, Electra, / And queenly Maia, small alike and faint, / But by the will of Zeus illustrious all / At morn and evening, since he makes them mark / Summer and winter, harvesting and seed-time."

The most famous reference to the Pleiades in English literature, however, occurs in the opening passages of Alfred, Lord Tennyson's prophetic "Locksley Hall":

"Many a night I saw the Pleiads, / rising thro' the mellow shade, / Glitter like a swarm of fire-flies / tangled in a silver braid."

Astronomers know that the Pleiades cluster lies about 440 light-years away and may be only between 50 and 100 million years old – a veritable cosmic youngster.

Unfortunately, many modern stargazers live in areas where artificial lights obliterate the faintest stars and often find it tough to find the Pleiades. But you can almost always spot it by casting your gaze slightly to the side of the cluster; this will make it much more visible than if you stare at it directly.

If you've never seen this magnificent star grouping shimmering in the east after dark, get out this week to do so. It truly is one of the most exquisite sights in all the heavens – and a true harbinger of the upcoming season.