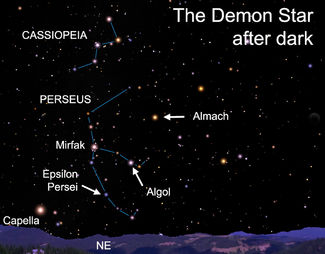 To find the star Algol this week, go outdoors during the early evening, and look low toward the northeast.

It's known as Algol, the Demon Star, and it glows diabolically in our sky each year as Halloween approaches.

To find it this week, go outdoors during the early evening, and look low toward the northeast. The accompanying sky map should help you locate it. After dark, you will easily spot the bright star Capella twinkling wildly very low over the northeastern horizon. High above it lies the famous "W" of Cassiopeia (now nearly on its side, appearing more like the number "3"), and between Cassiopeia and Capella, you'll find the stars of Perseus with its bright stars Mirfak and Algol.

To the writers of classical times, Algol represented the head of the horrible monster Medusa held by Perseus. Ancient and medieval astrologers considered it the most dangerous star in the heavens. "Al Ghul" literally signifies a mischief-maker, and the name still appears in the ghoul of the "Arabian Nights." The Hebrews knew Algol as Rosh ha Satan, Satan's head, while the Chinese gave it the gruesome title Tseih She, the piled-up corpses.

What modern astronomers find fascinating about Algol is that it shines not with a steady light but with a strange variability. Every 2.85739 days, the star dims noticeably for about five hours, remains fainter for a couple of more hours, and then gradually brightens again.

Algol, also called Beta Persei, is the first-ever discovered example of a class of stars known as eclipsing binaries – two stars orbiting a common center of gravity along nearly the plane of our line of sight. As the one star passes in front of the other, the combined light dims as we on Earth see an eclipse. Even powerful telescopes can detect only one point of light here, attesting to the pair's great distance – 540 trillion miles, or about 90 light-years.

If you keep an eye on Algol for a few hours before or after its minimum and compare its brightness with that of any nearby star whose light shines steadily, you'll be able to watch it enter or emerge from eclipse. For example, the star Almach above Algol shines the same brightness as Algol does at its maximum; the star Epsilon Persei below is nearly as faint as Algol is at its minimum.

By plotting Algol's brightness over time, astronomers have learned that one of its stars is about three times larger than our sun, while the other is only 20% larger. As these two stars orbit each other and the fainter one eclipses the brighter, we on Earth see the system's total light drop by about three times. In fact, extremely careful observations over the years have shown that there's actually a third star orbiting this pair every 1.86 years.