Encounter with the Red Planet 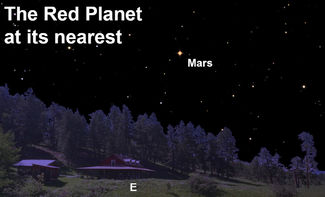 Mars is now the brightest object in the night sky.

It was Halloween eve 1938. Millions of war-jittery Americans listened as special news bulletins reported that the tiny town of Grover's Mill, New Jersey, had been captured by invaders from Mars.

It was only a radio play – a recreation of H.G. Wells' story "War of the Worlds" – cleverly disguised as a newscast by the radio magic of Orson Welles.

Those who didn't know, however, were panic-stricken. Police and military switchboards lit up. And the quiet of that October Sunday evening was shattered by a horrible yet totally imaginary invasion from Mars.

If you've ever seen Mars at its best, you can understand how the red planet has inspired the human imagination since people first began looking skyward ages ago. And now, just about 82 years after that famous broadcast, is a great time to see Mars at its best.

Now glowing brilliantly, Mars appears against the faint stars of the constellation Pisces, the fishes, which, of course, lies trillions of miles farther than the planet and appears only roughly along the same line of sight.

Mars reaches its closest to Earth during this orbital cycle on Oct. 6, when it will lie about 38.6 million miles away, and it reaches its official "opposition" one week later when it lies directly opposite from the sun in our sky. Head outdoors shortly after dark and you'll see what I mean. Stand with your back to where the sun had set, and there, right in front of you, will glow the brilliant orange light of Mars.

You'll have a hard time missing it because it outshines every star in that area; in fact, it's now the brightest object in the night sky –except for the moon (which passes near Mars on Oct. 28 and 29).

When Mars (or any celestial object) appears low in the sky, its light must pass through a much thicker column of air, moisture and dust than when overhead. This extra material attenuates the object's light and makes it appear fainter. But don't give up too early, for those who keep an eye on Mars over the next hour or two will see it become dazzlingly bright as it ascends the sky. If you happen to live in one of those areas of North America where smoke or haze from western wildfires has drifted over your sky, you may see Mars appearing even redder than it normally does.

The good news is that if you own a small telescope – or can visit your local planetarium or amateur astronomy club (if any are operating under COVID-19 restrictions) – you'll get quite a close-up view of the red planet at this time.

Whether or not you have a telescope, be sure not to miss the red planet at its best. And, on Halloween eve, why not journey back into time to celebrate the original "fake news" by listening to the original "War of the Worlds" broadcast under the glowing red light of Mars? Pop some popcorn; set up some chairs outdoors; and tune in here: https://youtube.com/watch?v=Xs0K4ApWl4g. The audio is, understandably, a bit scratchy, but you can turn on the closed captioning so you won't miss one dramatic word!