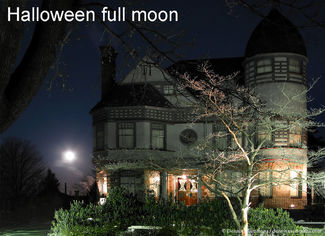 This Halloween, look for the smallest full moon of the year – which is also a blue moon!

Once every blue moon, weird things will happen. Who could possibly expect anything less from 2020? So, when I tell you that, on Halloween night, we'll experience an unusual situation in the heavens, you surely won't be surprised.

Ghosts and goblins out that night will be illuminated by a full moon, the first that all of North America has experienced on that date since 1944. But this won't be just any ordinary old Halloween full moon. On that night, the moon will lie near its orbital "apogee" – its farthest point from the Earth (about 251,600 miles away) – and will appear as the smallest full moon of this year.

And if that weren't enough, this year's Halloween "minimoon" will also be a blue moon!

Be sure to watch as the moon rises in the east just after sunset that night. Chances are it will first appear rather orange or red because its light must pass through a greater column of air on its way to our eyes, and particulate matter suspended in the air scatters the moon's light and makes it appear redder than normal.

So why, then, do we call it a "blue moon"? It has nothing to do with the color of our celestial neighbor. The term instead refers to the second full moon that occurs within a month. You know the phenomenon if you receive a paycheck every two weeks. Most often, you'll receive two checks a month, but occasionally, you'll be surprised by an extra one.

It's not that uncommon, and neither is a blue moon, despite the popular meaning of the term. It happens because our calendar isn't synced to the lunar phases, even though the word "month" derives from the word "moon." What we call a month – approximately one-twelfth of a year – is longer than the moon's "synodic" period – the average time between one full moon and the next (29.53059 days).

So, every once in a while – every blue moon, to be exact – two full moons will occur during the same calendar month. It happens, on average, about every 2.72 years, meaning that slightly less than 3% of all full moons are "blue."

Some say that the term applies differently. Most seasons of the year will experience three full moons, but occasionally, a fourth will sneak in. In this case, the third of that season would be known as a "blue moon."

This seasonal definition may have originated from a 1943 question-and-answer column in Sky and Telescope magazine, in which Laurence J. Lafleur traced the term to a 1937 Main Farmers' Almanac. Three years later, it seems, folklorist Philip Hiscock wrote in the same magazine an article that mistakenly gave birth to the "second full moon in a month" idea.

There is also a third possible meaning. Occasionally, thick dust, smoke or volcanic ash can actually make the moon appear blue. This is extremely rare, though; one might say it happens only once in a blue moon!