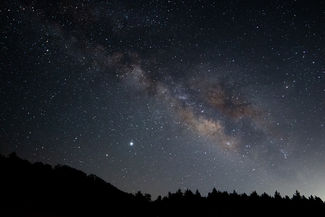 A nearly four-year effort that could link Julian with Borrego Springs as an internationally recognized dark sky community is near completion.

You might even say there is light at the end of the tunnel, however, that would be a totally inappropriate metaphor in this case.

A dedicated group of amateur astronomers and environmentalists have been working to achieve the Julian designation from the International Dark Sky Association, a U.S. based non-profit organization founded in 1988 to promote preservation of dark skies.

A leader in that effort is Doug Sollosy, a Julian resident who recognizes the value of a place where people can come to see the wonders of universe in a clear, dark sky that is not compromised by light pollution.

A love of astronomy and clear skies are what attracted him to move here full-time three years ago.

"There are lots of people who have never been exposed to a dark sky and have no idea of what it's like. There are some areas of the world where there is essentially no night because of light pollution," Sollosy said.

Not only does that rob people of seeing the beauty of the night sky, but it can negatively impact wildlife.

Like Borrego Springs, Julian is far enough away from urban lights and allows residents and visitors a clear view of the heavens.

Sollosy said that was the inspiration for the Julian effort.

Both the Borrego Springs Sponsor Group, an advisory body to the County, and The Anza-Borrego Desert Natural History Association have supported and assisted the Julian effort.

"The biggest issue is the color of lights, but also awareness and we find that most people are happy to learn how to be more efficient with lighting to preserve the night sky," Sollosy said.

He cites a few examples, such as using motion lights instead of constant illumination, or security lighting that is more diffused and effective, and store lights that go off once a business closes.

"We are not asking people to make changes immediately, but as lighting is replaced or there is construction the new, more efficient lightings standards will apply," Sollosy said.

If all goes well, the new lighting regulations should be adopted by the end of the year.

"The county planning folks have been very helpful and cooperative in this effort," Sollosy said.

The Julian community is also behind the dark sky designation.

Robin Boland is the manager of the Julian Visitor Center sees the designation as a positive for the community.

"We get lots of calls from out of the area during the summer about places to go around here to see the night sky and the Milky Way," she said. "Julian is famous for apple pie, but this would also be one more reason to love this area and come to visit."

Local Realtors, businesses, the Volcan Mountain Foundation, Julian Historical Society all support the effort and the Santa Ysabel Nature Center has even installed a dark sky exhibit for visitors.

Area wildlife groups, such as the Julian Wolf Center support efforts to reduce light pollution because of the negative impact it has on wildlife by altering sleep cycles if too severe.

Sollosy said there is a group of 40 to 50 local astronomers involved in the dark sky effort through The Julian Dark Sky Network (juliandarkskynetwork.com) that he founded several years ago.

The group hosts star parties several times a year, but now because of COVID-19 has shifted to virtual star parties for the time being.

One of their biggest events is the annual Julian Wonderfest in August that attracts over 1,000 people and includes an evening a star party.

Sollosy said nothing is planned as of yet, but is certain they will "celebrate when we receive the dark sky designation. A lot of people are motivated and excited."

The designation as a dark sky community with be quite an accomplishment, not to mention a valuable county attraction.

"We are only an hour away from a major city and that's unusual. This will be a real asset for the people of San Diego," Sollosy said.