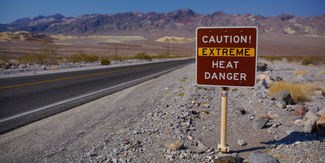 Temperatures are high all over the world. Death Valley, the "hottest place on Earth" in a century. The World Meteorological Organization is verifying the 129.9º F (rounded to 130º F) reading taken by the National Weather Service on Aug. 16 at 3:41 p.m. during the heat wave beelzebub, which has caused wildfires and fire tornadoes in America's south west, set mean records in California, and pushed the power grid close to collapse. Borrego Springs was the second highest temperature in the United States with 121º F on July 31.

Highest recorded air temperature in the past half century was in Kuwait in 2016, where it reached 129.2º F that would officially be the highest of all time, but for a reading from July 1913 from Death Valley, which is non-generally regarded as erroneous.

There is an extraordinary heat wave scorching the arctic. The town of Verkhoyansk in east Siberia broke its all-time heat record on Aug. 15 with 100.4º F with records dating back to 1885. Temperatures at present are exceeding 86º F in the Arctic Circle, 30 – 40 degrees warmer than normal.

"It's another step towards warmer years and we're going to continuously see records break," said Paul Ullrich of the University of California.

"The heat wave pattern is a pretty common pattern that appears during these months every few years, but what we are seeing is an exacerbation of that connected with climate change driven by human activity and greenhouse gases in the atmosphere."