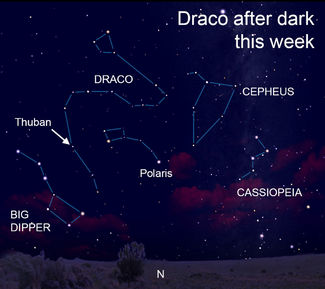 If you follow the two stars at the end of the Big Dipper's bowl, you'll point directly toward Polaris, the North Star.

While leading one of my popular Night Sky Tours recently, our discussion somehow turned to the constellation of Draco, the dragon.

Draco isn't one of the top 10 stellar groupings that people can name, but I was surprised that, when I mentioned it, I heard a chuckle coming from the darkness – as if I were making it all up.

Now, I admit that I've been known to do just that from time to time because, well, it helps to keep me amused. But on that night, I wasn't making anything up; Draco is quite real, and you should have little trouble finding this celestial dragon in a reasonably dark sky this week.

To locate it, first identify the seven stars of the Big Dipper low in the northwestern sky shortly after dark at this time of year. Draw an imaginary line among these stars and you'll trace a "bowl" of four stars and a bent "handle" of three more. British skywatchers know this grouping as the Plough, while Germans and Scandinavians know it as the Great Wagon.

If you follow the two stars at the end of the Big Dipper's bowl – these are known as the "pointer stars" –from the bowl's bottom to its top and extend that line about five times the separation of these two stars, you'll point directly toward Polaris, the North Star.

From this important star emerge the handle and bowl of the Little Dipper. This miniature dipper is smaller, fainter and inverted from the Big Dipper, but if you live in or near the lights of a large city or have bright moonlight, you probably won't be able to see it at all.

It's between these two famous dippers that you will find the celestial dragon, a large and ancient constellation that appears nightly in the northern sky. It wraps itself around the North Celestial Pole and remains perpetually above the horizon for much of the U.S.

Look for its long string of stars that begins directly between the Big Dipper's pointer stars and Polaris. This end marks the tail of the dragon. Follow the string of stars upward until it snakes back down toward Polaris, where it makes another sharp turn and heads upward once again.

At the upper end of the sinuous, dragon like body lies a group of four stars that forms the head of the dragon, but modern amateur astronomers refer to this shape as the "lozenge."

One of the most interesting sights in Draco lies near the opposite end of the dragon. The third star up from its tail appears as a medium-bright star called Thuban, whose name, not coincidentally, derives from an Arabic word meaning "dragon."

Because of the 25,800-year wobble of our Earth's axis, this star – and not Polaris – was the North Star some five millennia ago, when the Egyptians were building the pyramids. If we wait patiently for another few millennia, we'll again see Polaris drift away from the north celestial pole and watch as Thuban takes its place again as the North Star – a sort of back to the celestial future.

Now, don't start chuckling. I'm not making that up either!