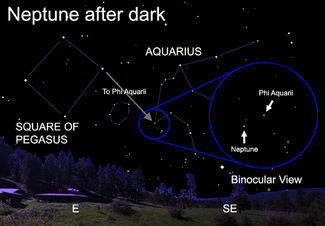 Finding Neptune among the faint stars of Aquarius isn't easy.

Scientists are in the business of classifying everything from butterflies to rocks to clouds to stars. And sometimes, when new understanding becomes available, they must go back and reclassify things to make them better fit the scheme.

So, it should have come as no surprise to anyone who follows science that astronomers reclassified Pluto – a tiny ice ball near the edge of our planetary system – as a "dwarf planet."

Pluto's reclassification from official planet-hood means that the honor of being the Solar system's most distant planet (for now) belongs to Neptune, the eighth-farthest world from the sun.

Neptune was discovered after astronomers learned that the seventh planet, Uranus – which William Herschel had found six-and-a-half decades earlier – did not keep to the precise path that skywatchers had predicted. Something was amiss in our Solar system, and astronomers began to search for the reason.

A young English astronomer named John Couch Adams calculated that the motion of Uranus appeared to be influenced by the gravitation of another large but unseen world that orbited far beyond it. Adams even calculated where this unknown planet might be found; unfortunately, no one in England ever bothered to search for it.

The same was true in France, where Urbain Leverrier independently made the same calculations. Again, no one seemed to care.

But Leverrier didn't give up. He showed his calculations to the German astronomer Johann Galle, who aimed his telescope skyward and found the new planet – eventually named Neptune – on his very first night of searching!

That was in 1846, and since then, few beginning stargazers have ever even looked for this distant world. Well now's a good time to change that because, this week, Neptune reaches its opposition point when it not only lies as near to the Earth as it ever gets about 2.69 billion miles, but also shines at its brightest.

Finding Neptune among the faint stars of Aquarius isn't easy, however, and since this distant world is invisible to the unaided eye, you'll need to use "star-hopping" techniques and have a very dark, rural sky, binoculars and patience to spot it.

First, locate the Square of Pegasus in the eastern sky after dark. If you connect the two stars on its upper right and extend that line downward past an elongated circle of stars, you'll soon encounter the faint star Phi Aquarii. Aim binoculars at this star and you will spot Neptune as a much fainter "star" just to its lower left. A small telescope aimed in its direction will show its distinctive bluish-green hue that distinguishes it from neighboring stars.

If you're not sure you've found it, sketch the stars in this area of the sky, being careful to mark their exact positions. Then, a week or two later, check out this same region of the sky and see which of the faint objects has changed its position. That's Neptune!

If needed, you can create a more detailed finder chart for the planet here: https://in-the-sky.org/findercharts.php?objs=10&duration=5.

As challenging as Neptune might be to find, there's something really cool about seeing with our own eyes the farthest planet of our Solar system!