Danger in the Desert 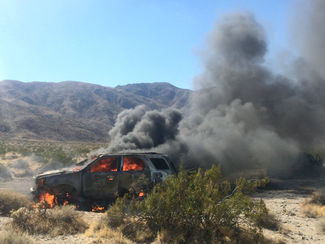 As has happened all across the planet, the COVID-19 closures allowed some of the natural world to take a respite from humanity. And Anza-Borrego Desert State Park was no different. For almost five months there were no vehicles coursing it's washes and trails. And, with the prohibitions on parking along the highway, there were hardly any humans venturing into it on foot either.

For these five months nature had taken over completely.

In the absence of witnesses, the spring rains triggered flash floods that cut new channels in the washes, and the wind blew sand across the landscape. At Seventeen Palms, winds caused palm fronds to collapse from some trunks in a heap. And in a version of "If a Tree Falls in the Forest..." the lone sentinel of a palm that had died long ago, and the tallest of the grove, fell to earth with no one to see it until perhaps months later. There was also evidence of earthquake activity with many new rock slides in washes. Some of these had even blocked the washes until large vehicles circumvented them with a new passage.

Instead of looking like dirt roads from constant vehicle use, most rockier washes looked like a natural kaleidoscope of sand and rock. And conversely, gravel roads that normally were hard packed and full of washboard were now filled with deep soft sand. What routes that may have been passable pre-closure by two-wheel drive vehicles were now rather difficult for even four-wheel drive.

Traveling back into the Park, upon its reopening in early July, the changes were soon evident everywhere. Like a person who returns to their hometown after many years, there were changes that were wonderful, and those that were not. Or at least, there were a few that required some caution.

With no vehicles to pack down and push sand to the side, the ever-present wind kept applying layers of drifting sand. Font's Point, everyone's favorite wine-and-cheese-party place, is as beautiful as ever. However, the wash to it has been filled by soft, relentlessly deep sand that has, even off-road vehicles, straining in the heat of summer. After navigating it back down to the road on our maiden voyage of the reopening, some folks in a Toyota Camry were about to head up into certain doom. After being warned "DO NOT DO IT!", they still continued on until reading the sign that says "four-wheel drive only." They backed up and asked about an alternative location. Told about the pull-outs along S-22 further east they drove off. The next day, I heard about a car that was stuck overnight at the end of Thimble Trail at Short Wash. I wondered if it was them.

Just before this encounter, a young guy flagged us down as we reached the road. He had decided to take his Corolla (what's with the Toyota's?) into the dune-filled Truckhaven Trail and got hopelessly stuck. He left his vehicle and hiked the mile or so to the paved road, but he didn't have water with him. Needless to say, he was almost literally "dying of thirst." We were in the right place at the right time for him.

Then there was a rather dramatic scene that played out a few days later. Two brothers in separate SUVs had been running up Rockhouse Road, which is normally hard packed dirt and even washboardy. But now it is covered with very deep sand (which you can see on the road in the photo above). One SUV got stuck. But as his brother tried to pull him out in the 115°F heat, friction caused his wheels to catch fire. Minutes later, the flames totally engulfed his vehicle.

To make matters worse, they didn't have decent water. On harder ground just off the road, I radioed our person on radio duty to call the Park dispatcher, then gave them welcome cold water with lemons. Soon the fire department, sheriff and ranger arrived, but they also had to be careful about parking. Aside from the totaled vehicle, it ended well, as later that day my fellow guide Michael extracted the stuck SUV and sent them on their way.

So, moral of the story is that the Park is looking more natural than it has in a long time. It is definitely worth exploring if you haven't already, but keeping in mind the usual summer safety protocol:

•Let other's know where you are going.

•Keep in mind that you may get stuck (especially now) or break down.

•Have AT LEAST 1 gallon of water per person

•Travel if you can with another vehicle, and have at least a well-charged cell phone.

•If stuck, don't leave your vehicle at least until the sun lowers and the temps cool, and only if you know where you are going. It's easier for authorities to find your vehicle than you.

•And, temporarily at least, do not travel up Font's Wash or the adjacent part of Short Wash unless you have an aggressive off-road vehicle.

So the Park is welcome balm for our COVID-19 blues, but stay safe and have fun out there, everyone!