The Fire King for the Annual Pegleg Smith Liar's Contest 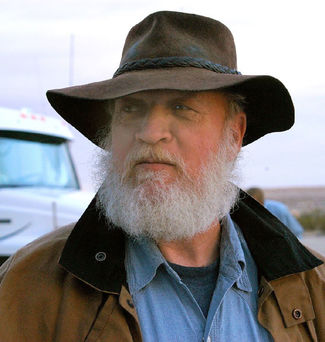 Lynn Clifford "Charlie" Watson was born in Tonkawa, Oklahoma, on November 15, 1946, and attended the Tonkawa campus of Northern Oklahoma College where he met his future wife, Pamela Lavelle. He worked at Nipak Fertilizer in Tonkawa and also helped on combine crews during wheat harvest. Charlie joined the Navy in the spring of 1968 on a delayed entry program. He married Pam on July 15, 1968, and left for Navy boot camp seven days later.

He served in the Navy for 10 years as an Electronics Technician with cryptographic training. He was aboard the USS Implicit, MSO 455, for four years during which time the ship did its last tour of duty in Vietnam from 1970 to 1971, clearing enemy mines from the Mekong Delta, Da Nang Harbor, and from the mouth and delta of the Qua Viet River.

After his military service, Charlie worked for several years for Tayburn Electronics in Carlsbad, California, building and installing camera systems on news station helicopters. In 1982 he went to work at Naval Air Station North Island in San Diego, working with avionics defense systems with a primary focus on E2C-Hawkeye rotor dome systems, similar to the US Air Force's Airborne Warning and Control System (AWACS). He continued this work until he retired.

Charlie's oldest daughter, Katy Lynn, was born in August 1969 at Letterman Army Hospital at the Presidio in San Francisco when he was stationed at Treasure Island for schooling. Rachel Ann was born in January 1972 in Torrance, California, while Charlie was stationed aboard the USS Implicit. After Rachel Ann graduated from high school and joined the military, Charlie and Pam became empty nesters, living in their home in Spring Valley. Their new hobby became desert field trips when they signed up for geology classes at Grossmont College in El Cajon. They found they both loved the peace and quiet they found in the desert during the weekends after their busy work week at the military station. Pam also worked at NAS North Island in Naval Supply until her retirement in 2012.

Pam recalled a particular trip to Anza-Borrego Desert State Park that they talked about for years after a particularly hectic week. As they left North Island and started driving on the Coronado bridge, they found themselves trapped in heavy traffic from a wreck on the bridge. Pam told the story:

"We were sitting in traffic just barely inching along when I said to Charlie, 'I know we have a lot to do at home this weekend, but what would you say if I said let's just go and sleep in the desert this weekend?' He said he thought that was a fine idea. When we finally got home, we changed clothes, packed some ice and water, and headed out of town without even packing any groceries. Burger King had a special on hamburgers for $1 each, and we stopped and bought 12 hamburgers and put them in the ice chest and headed out. We pulled into Mortero Canyon that night, ate our $1 hamburgers and slept in the back of Charlie's old Dodge Ram that night and the next night too. We didn't really do anything, didn't even have a fire, and I don't think we even saw another person all weekend. We just needed to smell the desert air, hear the coyotes, and be together in the quiet under the desert sky. The lawn didn't get mowed, the laundry didn't get washed, but we talked about that weekend for years."

On another weekend adventure, Pam and Charlie camped at the Split Mountain Primitive Campground and were happy that they were all alone. Then about 1 a.m. in the morning, several vehicles came into the campground with a troop of Boy Scouts who spent the rest of the night doing scorpion hunts. Pam recalled that the scouts were "yelling back and forth and using 'colorful' language that their mothers wouldn't have approved of, and generally being disrespectful campground jerks." Pam said that she swore that night that they were going to buy their own property in the desert where no one else could camp right beside them. In the early 2000s they bought a few acres in a remote area of Ocotillo Wells that the family continues to own to this day.

Through the years they continued to go on field trips led by Lowell and Diana Lindsay during the late 1980s and early 1990s through Grossmont College. One of those trips ended at the Pegleg Smith Liar's Contest by the Pegleg Monument. They were hooked, and began attending every year's contest.

For decades the Fire King of the annual event was Riverside-Press Enterprise columnist and historian Bill Jennings of Hemet. When Bill's health declined, Charlie Watson volunteer to take over in the early 2000s. Charlie brought his own style to the campfire, coming out the day before, clearing the area, bringing a container and firewood for the campfire, and running a line to his generator in his motor home to provide electricity for a sound system. He grew a beard, added a duster and hat, and could pass for Thomas "Pegleg" Smith except for the missing Pegleg. He and Pam – the Empress of the Salton Sea – became "regulars" as part of CACTI (the Committee to Accumulate Curious Tales of Incredibility) that kept the annual Pegleg Liar's Contest an ongoing fun event. They were honored with a special plaque in 2013 for their continued service, even after they moved to Coolidge, Arizona, in 2011, for continuing to make the long drive to Borrego Springs for the annual event.

Charlie's health slowly began declining just before he retired from North Island, due to his exposure to Agent Orange in Vietnam. He wanted to spend his final years in a quiet place where he could spend more time with Pam, asking her to take an early retirement from North Island in 2012. For a year their life was a little stressful as they moved into their Coolidge home while Pam worked at North Island and then drove home for the weekends to be with Charlie.

As things became harder for Charlie, they had to give up driving to the annual Liar's Contest. Charlie was Fire King for the last time in 2016. Charlie spent the last part of 2019 undergoing radiation and chemotherapy treatments for cancer. He and Pam took one last adventure on a 15-day cruise through the Panama Canal in October 2019. Charlie passed away on July 21, 2020, in his home surrounded by Pam and his two daughters. Pam and Charlie celebrated their 52nd year of marriage on July 15.

Charlie is survived by his wife Pamela and two daughters, Katy Lynn Hall of Tulsa, Oklahoma, and Rachel Ann Vence of El Cajon, California. He leaves behind seven grandchildren and a younger brother and a younger sister. His ashes will be taken to Tonkawa for burial in the family plot where generations of his family lay in rest.