Who Was the First Astronaut? Yes, Indeed! 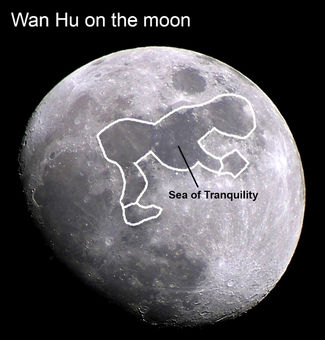 Legend says that Hu made it to the moon that night and that we can still see him there.

One of my favorite stories about the moon comes from ancient China and tells of the world's first "astronaut," a brave soul named Wan Hu. No, this isn't the opening of an Abbott & Costello routine, but the story is nearly as amusing.

Hu is said to have been a minor official in the Ming dynasty and, as legend goes, wanted desperately to journey to the moon. Of course, this was impossible in those days, but Wan Hu believed that China's advanced rocket and fireworks technology was the key to achieving his dream.

So, one night, while the moon shone brightly over 16th-century China, Hu strapped himself into a specially built chair with 47 gunpowder-laden bamboo rockets latched to it. On his command, his assistants lit the fuses and -- I'm sure -- ran frantically for their lives.

Within seconds, a tremendous roar ripped through the air, and a huge flash lit the landscape like day. When the smoke cleared, the assistants peeked anxiously out from their hiding places.

Hu was gone! And, as you might guess, he was never seen nor heard from again. For all anyone knew, Hu had gone to the moon!

Could such an event have actually taken place? Surely someone, somewhere throughout history, has tried such a stunt, but what about Hu? Did he really make it to the moon that night, or was he completely obliterated in the "launch"? In 2004, Discovery Channel's "MythBusters" decided to find out by trying the experiment with a crash-test dummy named Buster.

They found that their 47 rockets exploded upon ignition and shot the chair violently to one side, nearly destroying the chair and severely burning – but not annihilating – Buster. And, while the chair did "lift off" a bit, it didn't go very far – certainly not as far as the moon.

But that's not the story the Chinese tell. Legend says that Hu did, indeed, make it to the moon that night and that we can still see him there, sitting in the same chair while calmly reading a book.

This week, as the moon is approaching its full phase, look at the moon's face carefully. Its dark features are known to modern scientists as "mare" or "seas" – vast plains of solidified magma. But some also trace the outline of the intrepid Chinese explorer.

Now, while this story may be only legend, it was in the region outlining Hu's abdomen that the first astronauts from planet Earth set down onto the lunar surface 51 years ago this month – in the region known now as the Sea of Tranquility.

As the moon drifts through our sky from night to night and from month to month, the line between light and dark – the "terminator" – gradually migrates across the lunar surface as the angle of sunlight on it changes. But Hu will always remain, a constant reminder that stargazers even centuries ago dreamed of traveling beyond – to the moon, the planets and the stars.

And once you find Wan Hu on the moon, I promise our cosmic neighbor will never appear quite the same again.