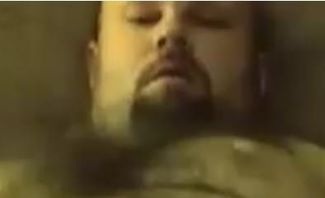 Screenshot taken during the meeting of the man who disrupted with pornographic behavior.

It took just 10 minutes for the July 30 Town Hall Zoom meeting on COVID-19 held by the Borrego Springs Task Force to get downright dirty, and the public's help is needed to identify the person(s) responsible.

An unidentified man was heard shouting profanity during the time Honorary Mayor and Carlee's owner Andy Macuga was explaining his position on the cancellation of the 55th Annual Borrego Days Desert Festival, when a digitized voice began cursing and interrupting him. The man was heard saying four-letter word diatribes.

This occurred shortly after introductions were made by host Bruce Kelley, PhD, Task Force Chair. Ten minutes in, this is when the crude exchange began. Things went downhill when the video feed showed a widely inappropriate obscene video of the man engaging in pornographic behavior, and shocked participants. This occurred more than once, despite being kicked off multiple times as they continued to dial in.

Macuga was unable to continue his presentation due to interruptions and after many attempts by Kelley to identify the intruder and cancel them, without success, the meeting was cancelled.

The person in the video can be described as a white, heavy-set man with a goatee. There were no other identifying marks or photographs in the vicinity at the time for identification. It is still unclear if the feed was a video taken from the Internet that was played during the meeting or an actual person.

The meeting was also screen recorded by the Task Force, so the face and obscenity, unfortunately, has been saved, and identification is waiting to be made when more information arrives.

The Zoom meeting was advertised via Facebook and email blasts, and made accessible to the public, as are many Town Halls. This town hall encouraged those who are interested in wanting to know more about the coronavirus pandemic and have their questions answered by a panel of experts.

Kelley said the committee would be assessing methods to handle future meetings that would censor further improper behavior. One suggestion by Martha Deichler was to hold the next meeting by invitation only.

The Borrego Springs COVID-19 Task Force is funded by the Borrego Endowment Fund and four additional donors. The Task Force provides Borregans up to date information on the pandemics spread, offering help and recommendations to locals for coping, testing, and reopening of businesses and resorts.