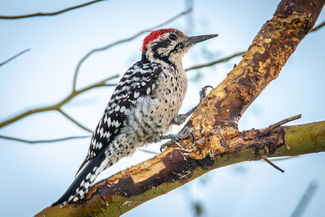 Somehow a woodpecker in the desert is a surprise to a lot of people.

Typically, we think of woodpeckers as being more common to forests with tall trees.

But visitors to Anza-Borrego, or residents should not be surprised to see or hear one of these colorful and industrious little birds, especially if you have trees growing nearby.

The ladder-backed woodpecker is a resident of the desert and might easily be identified as a Nuttall's woodpecker. One thing about birding is that is hones your skills of observation and looking closely you can see the ladder-backed, also called a cactus woodpecker, is different.

The deserts of San Diego County are the western fringe of this bird's range. It can often be seen on rocky hillsides dotted with agave, creosote and cactus patches, large cottonwoods at the edge of Coyote Creek or the trees around the park visitor center.

While similar to the Nuttall's and the Downey's woodpecker common to the area, the ladder back has less black on the face and upper back. Spots on the breast of the ladder-backed also distinguish it from the Downey's.

The ladder-backed woodpecker is described as a smaller bird, measuring about seven inches in length with adults having barred black and white back and tail.

There is a solid black line through the eye with an additional black line below the eye extending back from the beak. The breast is mostly white with smaller black spots.

Males have a red crown extending back to the nape and females do not have any red crown feathers.

Their diet is mostly insects, worms, ants and beetles that they will gather while foraging in cacti, agave, cottonwood trees, palo verde and willows.

Like many woodpeckers they will nest in tree cavities, often cottonwoods, desert willows, or agave stalks.

The ladder-backed woodpecker's range extends from the deserts of southeast California into Arizona, New Mexico and Texas and well south into Mexico.