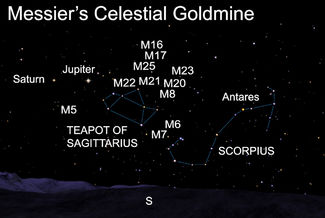 The Messier catalog contains more than 100 of the most remarkable sights in the heavens.

At this time of year, early-evening stargazers can tour one of the richest pieces of celestial real estate: the Milky Way.

Viewing the Milky Way on a clear August night is a truly marvelous experience. Wispy bunches of stars – so tightly packed that they appear to the eye as a milky band of light – are punctuated not only by bright individual stars but also by tiny regions that appear as hazy clumps.

Aim binoculars or a small telescope in the direction of these "faint fuzzies," as astronomers like to call them, and you'll walk the same path as Charles Messier did two-and-a-half centuries ago.

Messier was an 18th-century astronomer who scanned the heavens in search of new comets, hoping that these would lead him to fame and fortune.

To discover a comet, he knew he had to spot it long before it entered the inner Solar system and sprouted a tail that even the most casual stargazer might notice. Messier's goal was to find these smudges among the pinpoint stars and watch as they drifted slowly from night to night; only in this way could he be sure they were wandering comets and not permanent features of the cosmos.

But in his quest for hazy objects that glided slowly among the stars, he encountered dozens that did not move. What these were he didn't know. What's more, he didn't care. They weren't comets, and that was that. So to avoid wasting more of his time on them – and to prevent other comet-hunters from being fooled –he compiled a list of all that he encountered on his nightly watch.

Ironically, Messier never achieved fame or fortune for his comet discoveries; in fact, without looking it up, I'd be hard-pressed to say just how many comets he actually did find. No, it is his inventory of these "nuisance" objects for which he's now known.

The list – known to every astronomer as the Messier catalog – contains more than 100 of the most remarkable sights in the heavens: star clusters, nebulae, galaxies and more.

You can find most with binoculars, and many with the unaided eye, but only if you observe from a dark location without city lights. And if you'd like to find nearly a dozen in one region of the heavens, gaze low in the southern sky on August evenings.

Here, among the stars of Scorpius and Sagittarius, where the Milky Way appears its widest and most brilliant, Messier objects abound. Many of the faint fuzzies in this region are star clusters – families of dozens, hundreds or thousands of stars bound together by gravitation. Some of the best are M11 (the 11th entry in Messier's catalog), M6, M7 and M22. Others might be wispy clouds of gas and dust; M8, M16 and M20 are among the most spectacular of these diffuse nebulae where stars and planetary systems are continually being born.

Every time I gaze at these celestial spectacles, I wonder if Messier would have been so bothered by finding them had he known what he was actually seeing.

I'm just guessing, of course, but I'll bet he'd have been fascinated!