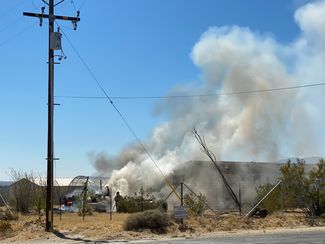 The Borrego Springs Fire Protection District units had quite a busy day on July 29, responding to back-to-back fires, managing to control both in a timely manner, avoiding any structural damage or injuries.

Just before 10 a.m., BSFPD units and Sheriff Billy Painter responded to a call of a RV fire at 3587 DiGiorgio Road. Upon their arrival, they found the RV in flames, and managed to control it before it spread to nearby brush and the home.

Owner of the home and five-year-old RV David Irwin posted via Facebook on the Borrego Springs 92004 page that he and John are OK and unharmed.

He said that the fire began shortly after a routine start of the RV and generator.

Irwin wrote, "I would start Lucille and her generator every two weeks to charge batteries and such. This time, I started the engine, ran it for about 15 minutes. About five minutes after shutting her off, I saw smoke coming from the hood. Tried to put water, but saw flames starting inside. Called 911."

The fire was incredibly close to their home that was not damaged, except for two windows, according to Irwin.

Additional crews arrived to assist, and remained on the scene to keep control.

It is unclear at this time of why the RV and generator began to smoke.

Shortly after the RV fire, units responded to a call from the Borrego Springs' Community Valley Bank, where an AC unit began to spark, igniting a small fire.

Luckily, it did not spread to any other part of the bank or the Laundromat next door, and everyone inside the bank was OK.

This caused the bank to close for the rest of the day, and remained closed the next day.

The cause of the AC unit catching fire has not been determined.