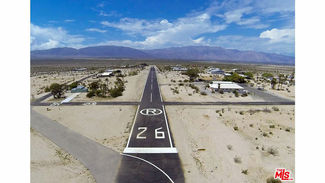 Not many people know that we have an Air Ranch in Borrego Springs, possibly one of the oldest in the country. The Borrego Air Ranch is a private residential community, with a runway and home with garages for their airplanes. There are approximately 24 homes there. It is quite something to be driving in the ranch, and suddenly see a plane taxiing out of a garage or landing in front of you on the airstrip.

In 1945, Ed Fletcher Jr. purchased 160 acres in the desert, two miles east of the town. He, along with Steve Fletcher, John and Vernon Stern, cleared an area for a runway, and had their first landing April 22, 1945. They also created the first taxi-way to their house.

In 1961, the shareholders of the Borrego Air Ranch decided to pave the runway and also the road from the main entrance.

In 1961, there were only five houses built on the airport. The expansion of the ranch was slow and interest waived, with the airport starting to fall into disrepair.

In 1971, interest in general aviation flying had returned with an upturn in the economy and with the added benefit of cheap fuel, new homes started to be built and the airport was given a face lift.

During the two following decades, general aviation flying flourished with Borrego Airport sometimes having as many as 300 planes landing on a Sunday. It peaked in 2004 with the airport having 22,000 aircraft operations averaging 60 per day and 28 aircrafts were based there.

Ocotillo Wells' Airport also saw a lot of action with planes parking by the road and their passengers utilizing the restaurants that were then present. Those days seem to have long gone. With air traffic now at a very low ebb, the Air Ranch still operates to this day and is a very interesting sight to see.

Let's hope with the opening of the Propeller Restaurant at Borrego Springs Airport, it will bring back the good old days of planes coming and going, and pilots coming to our town for recreation.