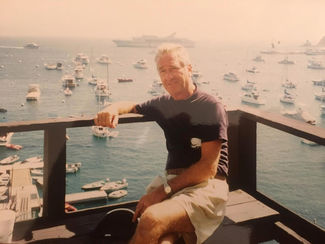 Sid was born in Stettin, Germany (now Poland) on June 15, 1928 and grew up near the Baltic Sea, where he spent time at the beach, acquiring his love of the sea. While in Germany, he became a trade painter after completing an apprenticeship during his early adult years, becoming what was later known as an "old school color chemist."

Sid married Hannelore Voshage in early 1951 and they immigrated to Toronto, Canada later that year where they soon became the proud parents of three children. Sid held painting jobs in Toronto for 10 years before moving to San Diego in 1961. In San Diego, he spent most of the rest of his career working for union painting contractors, during which time he was highly sought after for his custom work skills. He spoke often of his experience working for Theodor Geisel (aka the late author, Dr. Seuss) and his late wife Audrey, doing custom work at their home in La Jolla.

Sid was eventually hired directly by San Diego Trust and Savings bank in downtown San Diego to be their only in-house finish painter. Sid was friends with the bank's president, Thomas Sefton, and enjoyed telling of the time he met Ronald Reagan in the bank elevator. He remained at the bank until he retired.

Sid enjoyed the beach, sailing, reading books and occasionally smoking his tobacco pipe in his leisure time. He achieved his boyhood dream of owning a sailboat, teaching himself to sail and becoming the proud owner of a 30-foot Catalina, which he harbored at the Islandia Marina in San Diego for a number of years.

He lived in various parts of San Diego County over the years. Once retired, Sid moved to the desert community of Borrego Springs, where he loved the quietude and small town, slow-paced atmosphere. He spent his later years tending to his plants, reading, and amazing his family and friends with stories of his past.

He remained fiercely independent throughout his life. He will be remembered fondly as a sincere, honest, straightforward and ethical man, who had an appreciation for the arts and a love of history.

He is survived by his former wife and mother of his children, Hannelore Lewis; his beloved children, Thomas and his wife, Rebecca; Jeanette (Jenny) Huntley and her husband, Stephen; Larry and his wife, Susan; and grandchildren Nicole Huntley, Alec (and wife Laurel) Engel and Carly Engel. He will be deeply missed by his family – and his friends.

A Celebration of Life is planned to be held at a later time to be determined.